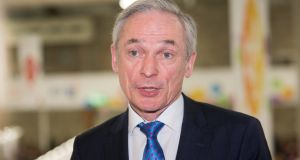 Teachers on career breaks will be encouraged to return to the classroom by lifting restrictions on their employment in a move aimed at easing acute shortages of substitution cover.

At present, teachers on career breaks may be hired by schools under “exceptional circumstances”, but are only authorised to teach for a maximum of 90 days in a school year.

Minister for Education Richard Bruton will announce on Friday that these employment restrictions will be suspended on a temporary basis.

Latest figures show there are least 2,300 teachers on career breaks in the current school year, up from 2,100 last year.

In addition, the Department of Education is to issue a note to schools on Friday emphasising that career breaks should only be granted if schools are in a position to fill temporary vacancies that would be created.

Teachers’ unions, however, are sceptical about whether the move will have any significant impact.

They argue that the biggest problems involve filling vacancies linked to short-term absences rather than teachers on career breaks of between one and five years.

At the annual conference of the Irish Primary Principals’ Network (IPPN) in Dublin on Friday, Mr Bruton will also signal a number of other changes in teacher training to help address staff shortages in key subjects at second level. They include:

* Expanding the number of undergraduate teacher education courses for key subject areas, which are shorter and less expensive options for students;

* “Top up” or conversion courses to upskill existing teachers to teach in subject areas of shortage;

* The potential for financial incentives to improve the update of some post-graduate teacher training courses will also be explored.

In a statement, Mr Bruton said he believed teacher shortages were linked to a large expansion in the number of permanent jobs created over recent years.

He said this meant schools were finding it more difficult to fill shorter-term gaps and to recruit substitute teachers.

Mr Bruton said he hoped these measures would help alleviate some immediate pressures being faced in the primary school sector.

“I am committed to continuing to work with stakeholders to consider what other options can provide assistance to schools,” he said.

Primary principals, meanwhile, say more than one-third of all primary schools have failed to find a substitute teacher on more than 10 occasions since the current school year began.

A IPPN survey of members indicates that principals are being forced into using support teachers to cover teacher absences, which is impacting on special needs provision.

“Every principal dreads that phone call when a member of staff informs us that they are ill but we are helpless to provide a quick fix.

“Pay inequality, coupled with the cost of living allied to the activities of recruitment agencies targeting third-level institutions, is resulting in hundreds of newly qualified teachers, trained at taxpayers’ expense, being lured to work in foreign countries.”