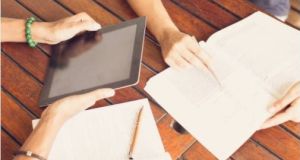 In 2014, Trinity introduced an alternate admissions route for some courses which measure applicants’ performances compared to others in their school. The aim was to attract creative students whose potential was not being measured by traditional exams. File photograph: iStockPhoto

Students who have secured places at Trinity College Dublin through a new admissions route not based solely on CAO points have lower drop-out rates than regular students, according to new data.

In 2014, Trinity introduced an alternate admissions route for some courses which measure applicants’ performances compared to others in their school.

The aim was to attract creative students whose potential was not being measured by traditional exams.

The results, which are being shared with the CAO, will feed into the development of national policy and, potentially, a new national admissions system.

Trinity’s provost Dr Patrick Prendergast said the first students who entered through this alternate route were now in their final year and have yet to graduate.

He said preliminary signs on their progress were “excellent”, with a drop-out rate lower than those from standard admission routes.

Dr Prendergast suggested this may be because students who secure entry through the alternate route “feel particularly lucky to be in college and demonstrate more commitment”.

He was speaking at a European education summit in Brussels, where he spoke about the need to make higher education much more accessible.

Dr Prendergast said improving educational attainment among under-represented groups needed to focus on both increasing numbers from diverse backgrounds into higher education, as well as ensuring that students “stay the course”.

“If universities don’t pay attention to both these requirements, then we are failing in our societal imperative to expand opportunities to higher education,” he said.

“It’s not just society at large that loses out from this failure; the individual university is also affected. If you’re only bringing in, and retaining, students from certain communities, regions and schools, then there will be conformity on campus – conformity of social background and conformity of thought.”

He said the Trinity Access Programme has had significant success in boosting underrepresented groups at the university and providing students with ongoing support during a foundation year before progressing onto a regular degree course.

Since 2009, he said, 73 per cent of mature students have completed the foundation course, with 93 per cent progressing to a degree and 90 per cent graduating.

Among young adults, 93 per cent completed the course, with 93 per cent progressing to a degree and 96 per cent graduating.

“These are excellent figures. In fact, the figure for retention of access students is the same as for students who enter college through the general admission route,” he said.

“Our aim is to expose students to a diversity of backgrounds, cultures and mindsets in the belief that they will grow through such exposure. This belief has proved justified.”

Dr Prendergast pointed to former student Senator Lynn Ruane as an example of how successful the scheme has been.

“A single mother who left school at 15 was elected president of the Students’ Union in 2015. In that role she strongly engaged students with social justice issues like housing, migration, minority rights, and climate change.

“She had a major impact on campus and, while still a student, was elected to the Senate, the upper house of parliament, in 2016 and is now using her talents on the national stage.”

He said the foundation year model has been so successful that other Irish universities have set up similar programmes, and in 2016 Trinity began partnering with Oxford University to pilot a programme there.