Children being targeted in ‘tsunami’ of online sexual behaviour 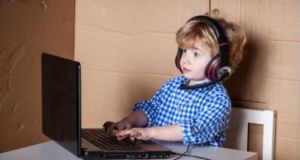 Dr Mary Aitken, an academic adviser to Europol’s European Cyber Crime Centre, said it was no longer good enough to simply give “helpful hints” to parents in the hope they can prevent their children being harmed online. File photograph: iStockPhoto

There is a “tsunami” of online criminal behaviour targeting children such as youngsters being coerced to share sexually graphic pictures of themselves online, a leading cyberpsychologist has warned.

Dr Mary Aiken, an academic adviser to Europol’s European Cyber Crime Centre, said it was no longer good enough to simply give “helpful hints” to parents in the hope they can prevent their children being harmed online.

Instead, she said, technology firms and the Government need to do much more to protect young people. “There are always technological solutions to technologically facilitated problems,” Dr Aiken said.

“When it comes to underage drinking, we don’t expect parents to be people who conceptualise solutions to the problem. We don’t say, ‘It’s up to you’, or that you need to educate yourself with helpful hints,” she said.

She was speaking following rising concern over the safety of children online following a number of cases where young girls have been coerced online to share sexually graphic pictures of themselves.

Dublin man Matthew Horan was sentenced on Friday to nine and a half years in prison for blackmailing young girls into sending him sexually graphic photos and videos.

He had used Skype, Snapchat, Instagram and Kik, an anonymous instant messaging application, to send and receive child pornography images from child users in Ireland.

Dr Aiken, a UCD academic, said latest UK studies indicate that anything up to 10 per cent of adults have had some form of involvement in sexual conversation with children online, including blackmail.

“This indicates that what we are seeing is just the tip of the iceberg. There is a tsunami of this behaviour coming at us down the line.”

She also pointed to a recent report released by Europol she was involved in which revealed victims as young as seven years are being targeted online.

While traditionally this had taken the form of paedophiles with a sexual interest in children, this was changing, and now included those seeking to gain financially through extortion and blackmail, usually involving sexually explicit imagery, she said.

She also expressed concern over Ireland’s “digital age of consent”, which was set at 13 years old. Dr Aiken said this was too low and pointed to countries such as Germany, which has set its limit at 16.

She said: “We need to put in place an infrastructure to support parents. Yet, paradoxically, we’re giving 13-year-olds permission to sign up for social media platforms without their parents’ consent. So, parents have no mechanism to know what their children are doing.”

Children’s rights organisations such as the ISPCC have advocated 13 as an appropriate age for digital consent on the basis that a higher age could restrict children from access to the internet.

However, Dr Aiken said this was not the case and the age of consent was about allowing companies to gather data on children and use this to target them commercially.

“Children are being harmed online. What keeps me awake at night is that this is happening on our watch. People will look back and say, ‘Why didn’t we do more to protect children?’ ”

She also backed official guidelines over best-practice for smartphone use for young people, such as restricting access to under-14s.

Dr Aiken said the Department of Education should inform Irish schools on guidelines on smartphone use in schools, such as not allowing them at primary level.

A spokeswoman for the department said it took the issue “extremely seriously” and said all schools were advised to have an “acceptable usage policy” over students’ use of the internet.

She said decisions on the use of phones in schools are taken at a local level by boards of management.