Minister slows down school reform in response to concerns 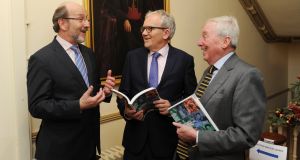 Minister for Education Joe McHugh is to slow down the pace of reform in schools on foot of concerns of “initiative overload” among teachers, principals and school management groups.

Speaking at the launch of the Education Matters yearbook by Brian Mooney, Mr McHugh said he had listened to education partners and was responding by “adjusting” the pace of reform.

He said has taken a decision to “pace” the commencement of new school admissions legislation by initially focusing on regulations relating to the “essential key features of the act”.

This legislation has paved the way for the removal of the so-called Baptism barrier in school admissions which is now in place.

Other sections have yet to be commenced, however, including measures to limit oversubscribed schools from allocating more than 25 per cent of their places to children of past-pupils.

Mr McHugh has committed to commencing the remaining sections of this act in time for admission to the 2020/2021 school year.

However, he said consultation was required with education partners in order to draw up the regulations that will be put in place alongside these reforms.

“The aim is to provide schools with significant flexibility in relation to the running of their individual admission processes but within certain broad and transparent timeline parameters which will apply to schools generally,” Mr McHugh said.

“In order to help provide this flexibility, the Department will be providing an outline of the proposed approach to the education partners in the coming weeks and will seek feedback as part of the consultative process.”

Mr McHugh has also pledged to delay the introduction of the new primary maths curriculum - due to come into force in the coming school year - by a further 12 months.

He said this would allow teachers time to expand on their understanding and engage more fully with the new primary curriculum, and allow for further supports to be developed for teachers.

Séamus Mulconry, the group’s general secretary, said he believed the Minister appreciated that “initiative overload” was swamping principals, teachers and boards of management and was not sustainable.

“With this announcement Minister McHugh has demonstrated that not only is he listening to the concerns of principals, teachers and boards of management but he is moving to address their legitimate concerns,” he said.

Mr McHugh was one a of number of high profile education figures at the launch of Education Matters: Ireland’s Yearbook of Education, edited by Irish Times careers analyst Brian Mooney.

The book, published by Phyllis Mitchell, is being made free to access online (educationmatters.ie).