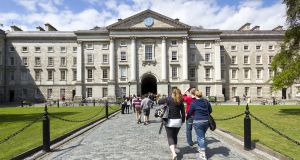 Brexit means “great opportunities” for Ireland’s universities, most of which have maintained their places in the rankings, but they need more funding to maintain their global standing, according to Times Higher Education (THE) rankings director Phil Baty said.

The rankings of 1,000 universities from 77 countries place Trinity, jointly with Indiana University, at number 117, up 14 places from its ranking of 131 the previous year.

Trinity’s rise, according to THE, is due to a stronger teaching reputation and greater research influence.

Ireland’s representation in the rankings overall generally remains the same, with nine Irish institutions included in the 1,000.

Mr Baty, editorial director of Global Rankings THE, said it was “great news” Trinity had improved its performance and that Ireland’s other leading universities have “remained steady despite pressures on funding and the continued rise of Asia”.

“Ireland’s global standing,” he warned, “is likely to decline if funding does not increase and institutions are not given greater autonomy”.

“The UK’s exit from the EU provides great opportunities for Ireland - the country could be well placed to attract researchers from the UK and elsewhere that want to retain access to EU research funding and remain in the EU. Ireland must ensure that it invests in its universities to take advantage of its position and remain a key global player in higher education.”

The 2018 rankings place NUIG, UCD and the Royal College of Surgeons between numbers 200-250, while UCC is placed between 351-400. Dublin City University and NUI Maynooth are ranked in the 401-500 bracket.

Of the nine ranked Irish universities, only Maynooth has fallen in the rankings, having been previously placed in the 351-400 bracket. THE said Maynooth’s fall was a result of a decline in its doctorate to academic staff ratio and citation impact.

The latest rankings come after almost a decade of funding cuts in the third level sector here. Funding has been cut by about 30 per cent since the 2008 financial collapse and a cap on the number of permanent employees has led to a 20 per cent reduction in faculty and staff numbers.

Such cuts, according to THE, are impacting the universities’ student-to-staff ratios and their ability to attract world-leading researchers.

Two UK universities - the University of Oxford and University of Cambridge - are respectively first and second in the rankings while two US institutions - the California Institute of Technology and Stanford University - are joint third. US institutions, including Harvard and Princeton, occupy 15 of the top 20 positions.

The rankings indicate Europe faces growing competition from Asian institutions. Europe has seven institutions in the top 30 while Asia has three. Last year, those figures were respectively 10 and two.

The rankings place China’s two leading universities above Germany’s top institution, LMU Munich. Of the 20 German institutions in the top 200, 12 have slipped. Beijing’s Tsinghua University has also overtaken Switzerland’s École Polytechnique Fédérale de Lausanne, and Peking University now outranks Sweden’s Karolinska Institute and is on a par with the University of Edinburgh.

Mr Baty said Europe remains one of the leading regions in the THE World University Rankings and is home to more than half of the top-200 spots (101 compared to 99 last year).

“There are signs that Asia is starting to threaten the position of some of Europe’s leading institutions, while Brexit poses a huge risk to the success of UK universities in the future. Europe will need to work hard to ensure it can sustain its performance in future years.”

Trinity College Dean of Research Professor John Boland said it had been “a good year” for Trinity in global university rankings despite “intense” global competition and “chronic underfunding” of higher education.

A world class university requires resourcing at internationally competitive levels and adequate investment in the university sector is necessary for Trinity to sustain and increase its position worldwide, he said.

“In a post-Brexit climate, it is important that we maintain these high standards and build on this reputation for our students, for the further development of leading research and for the overall development of the Irish economy.”

This year’s strong result for Trinity in the THE global rankings was helped by high scores in teaching and research influence (citations), he said.

Trinity’s highest score was in international outlook, “especially relevant in the current post-Brexit climate”, and demonstrated its capacity to attract staff and students from around the world and collaborate with international partners in leading research.

Trinity achieved this despite many challenging factors, including the rise of Asia-Pacific countries “due to much greater investment”, intense global competition and “continued chronic under-funding of higher education in Ireland”.

The college’s achievement was “a testament to the excellence of our teaching, research and overall educational experience”.

Trinity, he added, has risen this year in the THE and QS global rankings, has joined the League of European Research Universities and, for the third consecutive year, has been ranked first in entrepreneurship by the Pitchbook business platform.

The Irish Federation of University Teachers (IFUT) endorsed the concerns about the underfunding of the university sector, saying it continues to adversely affect the performance of Irish institutions in the rankings.

IFUT general secretary Joan Donegan said underfunding remains a “huge” problem sector and IFUT is also very concerned about the increasing casualisation of the workforce and use of short term contracts.

The Royal College of Surgeons in Ireland (RCSI), which maintained its position in the #201- 250 category in the rankings and was placed joint second out of the nine institutions in the Republic included in the rankings, welcomed its “strong performance”.

RCSI said its performance is linked in particular to its strength in the area of citations, an indicator of the growing impact of RCSI researchers on the international health sciences research landscape

Professor Cathal Kelly, RCSI Chief Executive/ Registrar said “Our strong performance in the THE World University Rankings is an affirmation of RCSI’s strategic investment in the expansion of our educational and research activities, which has intensified over the past two years. It is also testament to the ambition and commitment to innovation by our faculty, staff and students.”

This academic year will see the “most significant transformation” in teaching facilities in the college’s history with the opening of its €80m campus expansion at York Street, the first purpose built education facility in Europe to provide clinical healthcare education through state of the art simulation technology and immersion in real world working environments, he said.