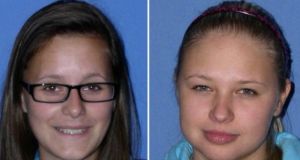 Sara Gibadlo (left,19) of Oranmore, Co Galway, and Dace Zarina (22), from Co Longford, who died in a fire at a residence linked to a college in Leuven, Belgium.

The conviction by a Belgian court of the director of the Irish college in Leuven, Belgium, over an apartment fire that killed two Irish students in 2014 has been welcomed by their families.

Dace Zarina (22) from Longford and Sara Gibadlo (19) from Oranmore, Co Galway, died in a fire at a house in the university town of Leuven in January 2014.

On Tuesday college director Malachy Vallely was given a one-year suspended sentence and fined €6,000 in relation to the fire by the Leuven Correctional Court.

The court also found the Leuven Institute for Ireland in Europe responsible for the women’s deaths and fined it €60,000.

The court also found 22-year-old student Shane Bracken from Co Offaly, who was staying at the same residence, guilty of causing involuntary deaths due to a cigarette and sentenced him to a suspended three-months jail term and fined him €600.

In a statement after the verdict, Colin Lynch, solicitor for the Zarina and Gibaldo families, said that “unfortunately a lot of questions remain”.

“How did two young and vulnerable students from the Galway-Mayo Institute of Technology end up being placed in what prosecutors described as substandard and inappropriate accommodation?”

Both women were on 30-week placements at the college from Galway-Mayo Institute of Technology (GMIT).

Mr Vallely rented his apartment to the Leuven Institute and it was then used to house students.

Half of the monetary value of the fines imposed on Vallely, the Leuven Institute and Bracken, were suspended.

During the trial the court heard prosecutors accuse both Vallely and the Leuven Institute of multiple fire safety breaches and overcrowding of the residences. At an earlier hearing a prosecutor described Vallely as a “slum landlord” who used his apartment as a “cash cow” for 23 years by renting it back to the Leuven Institute. The prosecutor told the court that fire safety in the residence in which the two students were killed had been “completely lacking,” and that the building had been inappropriately used to house the students.

Legal counsel for Vallely and the Institute had denied this and the charges, saying the local authorities were aware students lived in the apartment.

They alleged Zarina and Gibadlo may have died because they were drunk on the night of the fire and did not react quickly enough once the fire began.

Lawyers for the victims’ families said after the hearing on Tuesday the court had clearly found that not to be the case.

Mr Lynch read a statement on behalf of the families outside the court: “The families of the late Dace Zarina and Sara Gibadlo wish to acknowledge and to thank the Belgian police and the Leuven fire service for their efforts in investigating the tragic circumstances surrounding the deaths of their beloved young girls.

“They welcome the decision of the court today. Dace and Sara were beautiful bright young students with immense potential. They came to Leuven believing they were embarking on an exciting chapter in their lives and their studies.

“For the families it has been a difficult road and only now are they seeing an understanding of the circumstances surrounding their tragic loss. Unfortunately a lot of questions remain. How did two young and vulnerable students from the GMIT end up being placed in what prosecutors described as substandard and inappropriate accommodation?

“The families hope no other families will have to endure the senseless loss which they have endured.

“Finally, the families would like to express their thanks to their extended family and friends and communities in Oranmore and Longford for their tremendous support, prayers and good wishes. It touches their hearts and helps to ease their pain.”

The court will rule on the issue of damages on November 14th.

GMIT said it would not be commenting on Tuesday’s court proceedings at this time.

The fire began in the early hours of January 31st. An Irish student in a neighbouring room, Louise McCormack, alerted the two women when the fire broke out. Ms McCormack then fled back to her room and managed to escape through her window on to the roof. The court heard Zarina and Gibadlo were later found dead in the adjoining bathroom.

The establishment of an Irish College at Leuven dates back more than 400 years when Hugh O Neill stayed at Leuven following his flight from Ireland in 1607. The Annals of the Four Masters was composed there in the 1630s.