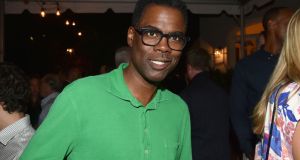 Chris Rock: Ticket holders will be given a device called a Yondr Pouch in which their phone will be locked for the duration of the comedian’s performance. Photograph: Patrick McMullan/Getty Images

Comedian Chris Rock has banned the use of mobile phones at his upcoming show in the 3Arena on September 30th.

Rock said the use of mobile phones for texting, tweeting and recording performances is a “major intrusion” on the quality of his performance as a comedian.

He has urged fans to “take one night off from being the paparazzo of your own life” and just enjoy the concert without feeling the need to record it for posterity.

Ticket holders will be given a device called a Yondr Pouch in which their phone will be locked for the duration of the performance.

It will vibrate if the phone rings, but it can only be unlocked outside the main arena.

Rock said he is fed up with fans posting clips of his performances on YouTube instead of enjoying the show.

“There is also the added problem for comedians who spend months polishing their performances to a high state of hilarity only to have their punchlines shared in advance by illegal recordings of their show,” he said.

The show is being billed as a “return to old school entertainment where the great memories of the night will remain in people’s minds and not on a cell phone”.

He has urged fans who do not want to have their phones locked in a pouch to leave them at home or in the car.

“Rather than seeing it as an inconvenience – see it as liberating and enjoy the moment,” the comedian said.