Traveller culture is set to join the school curriculum. What could lessons look like?

Folktales, songs, art and history of Travelling community could feature across a range of subjects 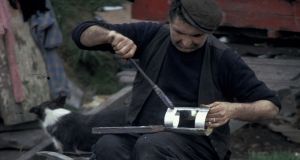 The Department of Education has pledged to include Traveller culture and history on the curriculum – so what, specifically, would it look like?

Anti-Traveller racism is deeply embedded in Irish society, with research showing that 63 per cent of people would reject Travellers on the basis of their “way of life” and almost 20 per cent would deny Irish citizenship to Travellers.

Travellers are also more than 50 times more likely to leave school without a Leaving Cert.

But perhaps we fear what we do not understand? What do we actually know about Traveller culture?

Senator Colette Kelleher, who introduced the Traveller Culture and History in Education Bill, says young Travellers rarely see themselves reflected in the education system. “At the same time, the wider community have had very little opportunity to learn about the diversity and wider context of Traveller culture and history.”

Patrick McDonagh (23) is a PhD student at Trinity College, researching late medieval English imperialist history in Ireland. He is also a Traveller, but has never lived in a caravan or halting site.

“My experience is not the same as all Travellers, and my accent mostly identifies me as a Northerner. But both my parents are Travellers and I have always known about my heritage,” he says.

With a background in history, McDonagh has long been interested in the origins of the Traveller community, a topic that has been the subject of much historical and pseudoscientific speculation.

“Travellers are part of a history of nomadism in Ireland, but not all nomads have been Travellers. Travellers have a distinct language, De Gammon, and this sets us apart as indeed language does for any community.

“There is also a tradition of piping and music, tin-making and, of course, storytelling. But it is hard to learn your history if nobody is teaching it.”

Dr Sindy Joyce, sociology lecturer and member of the Council of State, is the first Traveller in Ireland to graduate with a PhD.

“Every part of Mincéiri [Traveller] culture has nearly been criminalised,” she says,

“The 1963 report of the Commission on Itinerancy pushed for us to be permanently settled. The issues we face are the same as those of other indigenous groups across the world, including the Australian Aboriginals, and the curriculum should explore these.”

Instead of having a single module or subject, the proposal is that aspects of Mincéiri culture and history would pepper the curriculum, which would also avoid placing more stand-alone subjects in an already crowded curriculum.

“History and social studies could look at our past and how that affects our present,” says Joyce.

It won’t be just about suffering, of course.

“I’d hope it would look at the contribution of Mincéiri in the World Wars, the Easter Rising and the Civil War. During the Rising, Travellers used their wagons to smuggle guns.”

So, what type of content is likely to feature on the curriculum? No decisions have been made yet, but experts say there is wealth of culture and folklore that could be included.

The commission’s work with Travellers including a 1952 survey of the wider community which showed that Travellers were important in the rural economy, providing tinsmithing, seasonal work, chimney sweeping and – most valuable of all in an era before mass media and communications – news and information.

“With Travellers slower to get televisions and radios, they preserved a treasure trove of songs including The Well Below the Valley, which Christy Moore went on to record, and Raggle Taggle Gypsy which Tom recorded from John Reilly in Boyle,” says Ní Fhloinn.

“Finbar Furey is an absolute genius, while my colleague Dr Críostóir Mac Cárthaigh [director of the National Folklore Collection] has worked with Michael and Nell McDonagh in Navan on storytelling.”

“For me at least, the real benefit will be felt in 15 or 20 years time,” says Patrick McDonagh.

“Four-year-olds don’t know the word kn***er – they hear it somewhere. I hope that this change will lead people to see that we are not failures or drop-outs; we are our own distinct community.”

“We’re rarely seen as part of the story outside of a negative context,” adds author Oein DeBharduin. “We are seen as a topic, not a people, but this proposal would allow a real exchange of understanding.

“It is important to remove the pressure of educating away from children, especially Traveller children who should not have to [be] left to discover and reinterpret their identity.”

Joyce believes the proposal will benefit Travellers and the wider community.

“When children learn about different cultures and identities, it brings more empathy to society,” she says.

“Teachers will need diversity training. It won’t change things overnight. The Irish State needs to repeal the Trespass Act, bring in more transit sites and respect the culture and identity of Travellers today.”

In an addendum to her Seanad briefing, Ní Fhloinn said that the 2002 Trespass Act, which she campaigned against at the time, effectively prevented Travellers from stopping at their traditional halting sites.

“There is a fundamental contradiction in the State recognising the value of acknowledging Traveller culture and way of life, but preventing nomadism.

“Only a small number may want to travel, and perhaps only in the summer, but if travelling and nomadism isn’t central to Traveller life, what is?”

TRAVELLERS IN THE CURRICULUM: SONGS, FOLKLORE, CARPENTRY AND LANGUAGE

Oein DeBharduin, a Traveller and author, has long been interested in his culture and is writing a book on Traveller folktales.

“Mincéiri art, our contribution to Irish music, animal care, our folklore and our historical lore could be included in various subjects,” he says.

“Here is a carpentry style Travellers have used. In animal care, it could be about the types of horses bred by Travellers. In music, it could be songs recorded from Travellers and our knowledge of the uilleann pipes. The curriculum could talk about aspects of our language that are similar to Latin.

“And it could explain that we are not a monoculture: there is diversity within the Mincéiri community. There’s so much could be covered – we don’t have to reach too far for examples.”

According to Dr Bairbre Ní Fhloinn, the inclusion of these topics on the curriculum could have a profound significance.

She says, until relatively recently, “culture was was believed to be the preserve of the upper classes in society and history was written by the winners. In other words, it was all a matter of power.”

The traditional singer Frank Harte, who started his career at the age of 12 when he heard a Traveller man singing from a ballad sheet in the town of Boyle, Co Roscommon, said that “those in power write the history, those who suffer write the songs.”

“In this context, I would see Senator Kelleher’s Bill as being a very important step in the acknowledgement that culture and history are not the preserve of the elite, the wealthy and the powerful, but also belong to the ordinary members of society, including those who have been disempowered and dispossessed.”