Teaching sacraments at school: ‘I was a hypocrite through need’ 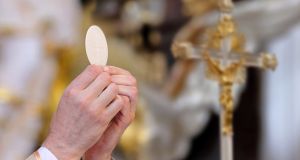 Many teachers will be heartened by Archbishop Diarmuid Martin’s plans to move sacramental preparation from schools to the community. Photograph: iStock

Since retiring more than two years ago I have written about my experiences of being both a non-believer and a principal of a Catholic school.

One headline referred to me as the “atheist principal of a Catholic school” – as inevitable as mud sticks, I now wear that T-shirt. However, in the 90 per cent of our primary schools under Catholic patronage, many of these T-shirts are worn under the teacher’s suit.

This came to mind recently when Bishop Alphonsus Cullinane wrote to the teachers and principals in his Waterford diocese advising them not to use religion class time to go Buddha-like and teach yoga, mindfulness and meditation. Down with that sort of thing, Ted?

However, this was not an unreasonable request as Bishop Cullinane is the patron of these schools. Teachers working under Catholic patronage have a contractual obligation to uphold the ethos and to teach religion for 30 minutes per day, irrespective of their own beliefs.

Subservience to this contract is non-negotiable. There is no right of conscience. The patron’s word is final.

His word on this issue directed teachers “to pray the Rosary and to spend time with Jesus in adoration or in quiet meditation in the classroom, you will find a place for him that is beyond price”.

He then asked teachers to practise Christian mindfulness, “emptying the mind of everything unnecessary so that we become aware of the presence and the love of Christ . . .”

This was a big ask both for teachers who practise their faith and those who do not. It was a time that I was glad not to be a recipient of such a demand on my teaching time. While I understand why a bishop would want teachers to teach prayer and communication with Christ, I would have been lost as to how to make this happen.

In my 40 years working in Catholic schools teaching prayer was something I found both difficult and hypocritical. The hypocrisy did not just stem from my own non-praying self, but also from the knowledge that, more often than not, children came from homes where Home and Away out-donged the peal of the Angelus bell at six o’clock each evening.

I was teaching children prayers that few had heard of in their homes which was evident in the starting-from-scratch atmosphere whenever we began. Showing children how to bless themselves often seemed like a Hokey Cokey version of “Head, Shoulders, Knees and Toes”.

Teaching prayer by rote was relatively easy. Children picked them up phonetically but with little comprehension. The Lord’s Prayer, The Hail Mary and The Glory Be are language-rich, and I often attempted to teach the children what the words meant.

On one occasion a little boy whose father had died when he was a toddler told me he thought “Our Father who works in heaven” was the opening line. I remember truthfully telling him that “art in” and “works in” are basically the same.

In teaching children how to pray, I was mindful of shelving my own right of conscience. I was teaching children words of prayers that I never used. I was a hypocrite through need. They learned through my ironical rote and not to the dulcet tones of parental voices. I taught them what to say and they learned how to say it. Ultimately, they knew their prayers verbatim and I was doing my job.

Using mindfulness to create the prayer space with Jesus, to which Bishop Cullinane refers, brings the teaching of prayer to a much higher level of indoctrination.

Here, the teacher not only needs to teach but to lead the children into a private space where they form a one-on-one with their own understanding of God. A space where they are “aware of the love and presence of Christ”.

This requires far more pedagogical technique than rote-teaching mantras. To bring the children to Jesus through meditation requires skilful practice only attainable by someone who truly believes in what they are doing. We of little faith or none cannot hide behind our shields of hypocrisy.

There are primary school teachers who would welcome the challenge offered by Bishop Cullinane. There are many more who would be heartened by the recent words of Archbishop Diarmuid Martin with his plans to move sacramental preparation from schools to the community.

This would involve the training of lay catechists in parishes to prepare the children for Holy Communion and Confirmation outside of the school day, removing the involvement of the class teacher. It is inevitable that the importance of the role of community-based catechists will grow.

It might also pave the way for teachers contracted to work in denominational schools to give free expression to their own rights of conscience to the mutual benefit of both schools and the church.