Diagnosis not needed to secure SNA support for children 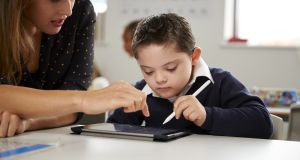 The Government is planning to hire an additional 1,000 SNAs next year. Image: iStock

Thousands of parents will no longer need to pay for a diagnosis of a disability in order to access special needs assistants (SNA) for their children under major changes to the €500 million scheme.

The Department of Education is instead planning to automatically front-load 17,000 SNAs to schools in advance of the school year. This means students would have immediate access to support in their school rather than having to wait for a diagnosis from private professionals or the HSE.

The changes are likely to spark concerns among some parents that their children’s hard-won access to SNA support is at risk of being cut or diluted.

The Department of Public Expenditure, in particular, has previously sounded alarm over the rising cost of the scheme, and the fact that there are more SNAs than gardaí on the public payroll.

However, the Government will pledge that existing levels of support for schools and pupils will be protected. In addition, it is planning to hire an additional 1,000 SNAs next year.

It said that if parents or schools felt they were not getting enough support there would be a “robust” appeals system.

The plans are due to be discussed by the Cabinet on Thursday, and if formally signed-off will come into force from next September.

An information campaign is being planned to inform schools and parents about the changes in the new year.

There are also likely to be changes to the role of SNAs, whose duties at present are confined to simple care needs, such as toileting, mobility and feeding. A new training programme is set to get under way shortly to upskill 500 staff so they can assist with the delivery of speech and language or occupational therapy.

The new scheme also means there will be greater job security for thousands of SNAs. They are currently hired on nine-month contracts with no guarantee that they will be retained in a school from year to year. Informed sources say SNAs will in future be hired for two- to three-year periods.

The reforms are based on recommendations proposed by the National Council for Special Education, which has warned that “radical changes” are needed to improve outcomes for students.

It has warned that the diagnosis-based system is leading to delays accessing support and is unfair to poorer pupils who parents cannot afford private assessments.

Under the changes, the number of SNAs to be allocated to individual schools will be based on the current level of support they receive and the number of special education teachers they have.

Schools are likely to give the move a cautious welcome, especially given that they will have far less paperwork to complete due to the new model of front-loading SNA support.