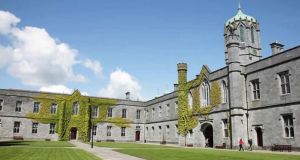 The report found over €48,000 had been spent by Galway University Foundation on business class flights between 2015 and 2017. Photograph: NUIG website

An investigation by the Charities Regulator into the National University of Ireland Galway’s (NUIG) fundraising charity found spending on luxury 5-star hotels, business class flights and taxi trips from Galway to Dublin were “inconsistent” with value for money policies.

The charities watchdog launched an investigation into spending following concerns raised back in June 2017 over hospitality and travel expenses. Universities have foundations set up to fundraise which are technically separate but closely linked to the university.

The report found over €48,000 had been spent by Galway University Foundation on business class flights between 2015 and 2017. It found on average €385 a night was spent on hotels when they were used with a mix of four and five star hotels used, which was “in excess of Revenue guidelines for overseas travel”.

Hotels booked by the foundation included the five-star Grand Hyatt and the Shangri-La in Singapore, which advertises itself as a “luxurious sanctuary”.

When questioned over the spending on premium travel Dr Jim Browne, who was the NUIG president and foundation director during the period, said “we’re expected to be ready for meetings, being there is important and being tired is not giving our best,” the report said.

“The use of business class travel within the charity appeared to form a substantial percentage of flights taken (30 to 40 per cent of flights taken) by certain individuals”, the report found. The spending on high end hotels and business class flights was “inconsistent with general best practice and value for money considerations,” it said.

The charity spent over €10,000 on ten trips flying directors’ spouses to destinations including New York, Chicago, San Francisco, and Los Angeles, the majority of which were business class flights.

Some €7,965 of the spending was for flights for Dr Browne’s wife, the report said. The regulator’s inspectors said they found no evidence in the charity’s policies to permit covering spousal travel, and since March the foundation has stopped the practice, the report said.

In an interview with the investigators Dr Browne said his wife’s travel was “exceptional” and only took place when required by the charity for “the purpose of building philanthropic relationships”.

The report also found over the three year period more than €30,000 was spent on taxi fares, with “no substantial backup documentation on file” for the purpose of the trips and need to travel by taxi.

Dr Browne travelled in 77 of the 102 taxi trips with most of the journeys being between Dublin and Galway. He told regulator officials his role was a “demanding one” with events often in the evenings followed by early morning meetings elsewhere, the report said.

The former NUIG president said “it was more efficient and safer to avail of a driver than to risk driving when tired”, and taxis were used when he “could not use public transport to meet the requirements of his diary”.

The regulator’s report concluded the “use of charitable monies on a taxi service for long distance travel is generally inconsistent with value for money considerations”.

The report also criticised the lack of effective oversight of spending on “donor acknowledgement,” noting over €61,000 was spent on the Galway races over the three years, and nearly €10,000 on tickets to international Ireland rugby matches.

The regulator’s inspector also noted that in many respects the “charity appears to be a well run organisation,” but improvements were needed in how the use of taxis were justified and documented, and there needed to be clearer distinctions between when staff were acting on business for the foundation and for the university.

The regulator said while a level of donor entertainment was often required when fundraising, there was a reputational risk if the spending “appears to be excessive,” the report said.

The foundation was set up in 1998 and since then has raised €146 million in donations for the university. In a statement Galway University Foundation said it welcomed the publication of the regulator’s report. “As requested, we will provide the Charities Regulator with an update on the matters raised in the report,” the statement said.