Medicine, statistics and engineering graduates earn up to twice that of arts, humanities 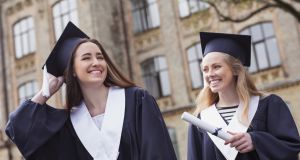 While women outperform men in the Leaving Cert and third level, they earn €14 less each week a year after leaving college, rising to €130 after eight years. File photograph: Getty

Substantial salary gaps open up between college graduates within years of leaving higher education, according to a Higher Education Authority (HEA) study.

The research, which tracked the earnings of tens of thousands of graduates who left third level between 2010 and 2017, shows medicine graduates are by far the best paid within four years of leaving college (€1,085 per week), followed by graduates of statistics (€925), chemical engineering (€853), medical diagnostic technology (€830) and ICT (€802).

By contrast, pre-school education and arts graduates are the lowest earners and take home about half these amounts.

Other relatively low-earning subjects include political sciences/civics and childcare/youth services.

The research breaks down earnings after completing degrees in more detail than ever before by analysing pay linked to about 70 different areas of study. The average weekly earnings for graduates across all subjects after four years is €658 per week.

It also indicates that the trajectory of a graduate’s earnings are heavily influenced by combination of factors such as Leaving Cert points, type of school attended and gender.

For example, college graduates who went to fee-paying schools earn more than graduates who attended disadvantaged schools – even where they ended up studying same third-level course.

The figures show that, overall, graduates who attended private schools earned 22 per cent more than those who attended disadvantaged or Deis schools eight years after college.

However, when these figures are adjusted to compare students on a like-for-like basis – such as studying the same type of course – the difference in earnings falls to just under 3 per cent.

The study also shows how a gender gap in earnings is opening up between men and women within a year of leaving college.

While women outperform men in the Leaving Cert and third level, they earn €14 less each week a year after leaving college, rising to €130 after eight years.

However, even after adjusting for this and comparing men and women completing the same courses, there is still an earnings gap of about 3 per cent.

For example, graduates from institutes of technology earn 14 per cent less than university graduates four years after graduation. But when comparing like-for-like individuals, this difference falls to 4 per cent.

The study also examines these trends for postgraduate students over the same time period.

It shows postgraduates with qualifications in physics have the highest average earnings four years after graduation.

Other high earning subjects for postgraduates include accounting and taxation, electronics and automation, and software/applications development.

As was the case with undergraduates, postgraduates from arts & humanities fields of study comprised the five lowest earning subjects

The research is based on matching Revenue data on earnings with individual students and graduates on an anonymised basis.

The study’s authors have cautioned that the income data covers PAYE income for employees only; self-employment income is excluded.

Earnings are defined in the report as an individual’s weekly gross earning, less tax reliefs such as pension contributions.