Up to 14,000 to get payments from Student Assistance Fund in current academic year 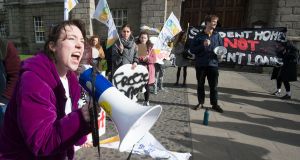 Thousands of students have applied for hardship funding from colleges amid a backdrop of unrest in universities over hikes to on-campus rents.

Latest figures indicate that at least 14,000 students have applied for funding totalling €9 million from the Student Assistance Fund in the current academic year.

This fund provides financial support to those experiencing financial difficulties while attending college.

While a detailed breakdown of expenditure is not available for the current year, education sources in individual colleges say the funding in many cases has been heavily oversubscribed.

The funding may be used for rent, heating and lighting bills, as well as travel, food, childcare and medical costs.

Joanna Siewierska, president of UCD Students’ Union, said these increases were heaping pressure on student groups who are already underrepresented in higher education, such as those from disadvantaged areas.

“Rent and transport costs are the biggest financial issues affecting students,” she said.

“We have had students arriving into the students’ union with sleeping bags because they can’t afford a place to rent, or students sleeping in cars or Dublin Airport.

“There are also students on a regular basis looking for food vouchers because they can’t afford to eat.”

She said the issues affected a broad spectrum of students, ranging from asylum seekers, domestic students and even international students.

“There is a view out there that international students are wealthy or cash-cows for universities, but many have taken out big loans to study here and they’re then limited in being able to work to make money,” she said.

A spokeswoman for the Higher Education Authority (HEA) said part of the Student Assistance Fund has been ring-fenced for under-represented students and part-time students who are lone parents.

Funding is administered at a local level by each institution, subject to HEA guidelines.

A detailed analysis of the Student Assistance Fund published in recent years found that the bulk of funding was paid out between October and December.

It found it was helping on average 14,000 students, with a spike in demand at the beginning of the academic year.

The fund has been fully spent in recent years, with about 80 per cent of students who applied receiving assistance of some kind. It found the average payments were between €500 and €999.

Protests over rental increases in colleges, meanwhile, have been continuing in recent weeks.

The Union of Students in Ireland (USI) has encouraged students to continue picketing and camping out until all institutions agree to reverse the rental increases.

UCD students kicked off a series of protests earlier this month after the university’s decision to increase on-campus accommodation rents by 12 per cent over the next three years.

They subsequently erected tents on campus, a move replicated in NUI Galway and UCC where students have been protesting by sleeping out on campus and occupying parts of the college. Rents are set to climb at on-campus accommodation at UCC and NUI Galway by 3 per cent and 4 per cent next year, respectively.*


* This article has been amended to correct an error