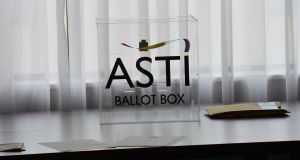 A dispute between the Association of Secondary Teachers, Ireland (ASTI) and the Department of Education over the timing of professional collaboration meetings has escalated into a major stand-off which is threatening tuition hours for thousands of pupils. File photograph: Alan Betson/The Irish Times.

A dispute between secondary teachers and the Department of Education over the timing of professional collaboration meetings has escalated into a major stand-off which is threatening tuition hours for thousands of pupils.

It follows a circular being issued by the department this week which gives teachers a number of options for holding these meetings in a way that does not impact on tuition time.

However, it says teachers who insist on the meetings taking place during normal tuition time will lose “professional time” and may end up teaching for up to eight hours longer over the course of a school year.

The Association of Secondary Teachers, Ireland (ASTI) said the circular was “unacceptable” and pledged to maintain its directive that staff must not attend meetings outside normal tuition hours.

The Teachers’ Union of Ireland (TUI), in contrast, is permitting its members to attend these Subject Learning and Assessment Review (Slar) meetings outside normal teaching hours.

In a statement, ASTI president Deirdre Mac Donald claimed the circular was at variance with arrangements agreed between teachers’ union dating back to 2015.

She said it would result in increased workload for teachers and that inadequate additional teaching resources were being made available to facilitate the meetings.

Individual schools have been given up to March 16th to confirm how the plan to schedule their meetings.

These meetings are aimed at providing an opportunity for subject teachers to share and discuss samples of their students’ work and achieve consistency in grading.

Most full-time teachers who teach two subjects would be expected to attend up to eight hours of these meetings over the course of a school year.

However, secondary school managers say the ASTI’s stance is resulting in a “staggering” loss of tuition hours for pupils and is putting schools in an “impossible position”.

To facilitate teachers engaging in Slar meetings and other curriculum changes, the department has provided secondary teachers with “professional time”.

This is a reference to the 40 minutes a week – or 22 hours a year – of non-teaching time given to teachers involved in delivering the junior cycle.

This professional time has been facilitated by the department by hiring almost 700 additional teachers.

Sources say the department is prepared to cut teacher allocations on the basis that it will not “pay on the double” by hiring additional staff and using paid-for substitution to cover Slar meetings on foot of the ASTI stance,.

Well-placed education sources say this could lead to a reduction of up to 260 full-time teaching posts across voluntary secondary schools, which are mostly staffed by members of the ASTI.