‘I don’t have the estimates ... assessments will need to be carried out on all 42 schools’ 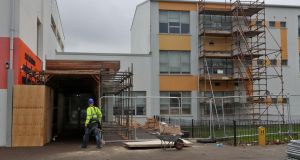 The scale of remedial work required to make 42 schools with structural concerns safe will require “big money” and a supplementary budget, according to Minister for Education Joe McHugh.

Costs are set to escalate in the new year when more detailed structural investigations get under way. This will determine the extent of work required to ensure all schools are safe.

Considerable sums of money have already been spent on temporary repairs across dozens of schools in recent weeks.

Mr McHugh said he did not know the final cost until assessments are concluded.The Minister said he was in discussion with colleague Minister for Finance Paschal Donohoe on securing additional funds this year and next.

“I don’t have the estimates carried out. But we’re into a space where it will be big money and that’s the reality to ensure we have these schools up to a proper standard,” he said.

“Structural assessments will need to be carried out on all 42 schools, with varying degrees of work needed . . . With that in mind, I’ll be speaking with Paschal Donohoe as there will be extra money involved.”

He confirmed he was in discussion with his department’s legal team, Attorney General and the Chief State Solicitor’s Office over legal action against the firm which built all the schools affected, Western Building Systems.

Repair work is taking place at three primary schools in west Dublin which are partially open.

Only the first floors of Tyrrelstown Educate Together, St Luke’s and Gaelscoil Eiscir Riada in Lucan – all three-storey buildings – are open. Officials hope that all three will be in a position to fully reopen over the coming weeks.

The emergency repairs for these schools, and another 19 which have required temporary remedial and safety work, is likely to be significant.

Hundreds of staff – many working overtime – have been hired over recent weeks to ensure the schools are safe for pupils.

The cost of building these 42 schools is estimated to be in excess of €100 million. Mr McHugh has previously pledged to carry out a review of the department’s “rapid build” scheme and examine whether existing building regulations are robust enough to ensure the safety of new schools being built.

The review is unlikely to get under way until after permanent remedial works have been completed on schools.

In a statement on Tuesday night, Western Building Systems said it welcomed any review and called for it to be independent of the department.

“If an inquiry is to be credible, then it must be independent of the two main contracted parties to every school building project – the department and the contractor. The role of qualified professionals who certified and project managed the schools is also a consideration,” it said.