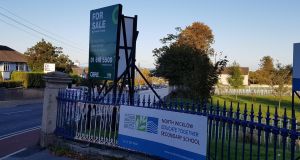 A ‘for sale’ sign outside the temporary home of North Wicklow Educate Together Secondary School in Bray, Co Wicklow. The school is due to vacate the property by May 1st next year.

A secondary school in Bray, Co Wicklow, says it is being forced to source emergency accommodation in hotels and sports clubs for its students because it must vacate its current building ahead of the State exams.

North Wicklow Educate Together Secondary School is currently based in temporary premises on Putland Road.

This property is for sale and subject to vacant possession on May 1st 2019, just weeks before the Junior Cert exams.

Two years ago the Department of Education announced that the school’s permanent home would be on a campus co-located with Bray Institute of Further Education.

However, work has yet to commence on the redevelopment of the campus which is likely to take a number of years.

Jonathan Browner, the school principal, said a meeting this week of Kildare-Wicklow Education and Training board to discuss the co-location of the school with Bray Institute of Further Education was inconclusive.

“We’re now at the stage where we’re making active inquiries to hotels and sports clubs about sourcing temporary accommodation. It’s incredible that it has got to this stage,” he said.

“We’ve been warning that the lease is going to run out and no one is listening to us. We feel we’re being stonewalled.”

The schools currently has an enrolment of about 180 students and is due to grow to almost 300 next year. About 60 students are due to sit their Junior Cert next year.

Mr Browner said uncertainty over the school’s future was impacting on students, especially those with special needs.

“It’s unbelievable that we have to tell children that we don’t know where we’ll be next year,” he said.

“They have a right to 21st century education and should have a basic expectation over things like where their school will be.

“Our ASD [autism spectrim disorder] students thrive on routine. We opened a class for them based on demand and now we feel we’re being left high and dry.”

In a statement, the school’s board of management said the Department of Education has known that this issue was inevitable for the last two-and-a-half years

“We now call on Minister Joe McHugh to intervene immediately to ensure that this farce does not continue,” it said.

In a statement, the Department said a major capital project to provide permanent accommodation for the school is being planned.

Kildare and Wicklow Education and Training Board has not yet formally responded to a request for comment.