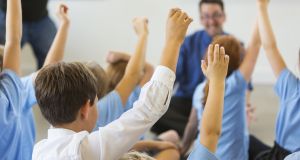 The survey noted that at primary level special needs teachers are being redeployed as class teachers. File photograph: Getty Images

Numbers applying for teacher-training courses have “collapsed” by more than 60 per cent over the past five years, new figures show.

The dramatic fall-off comes as concern mounts over the educational impact on students of teacher shortages in schools across key subjects.

Surveys and reports compiled by school management organisations and teacher unions – seen by The Irish Times – state that Leaving Cert students in some schools are being left with unqualified tutors for subjects such as maths and Irish for months on end.

At primary level, they note that special needs teachers are being redeployed as class teachers, resulting in reduced access to special education among pupils with additional needs.

In some cases, classes which do not have a full-time teacher are being taught by individuals with no qualifications, who may teach for a maximum of five days, under employment rules.

The Catholic Primary Schools Management Association – which represents about 2,800 primary schools – has found that 90 per cent of principals are having difficulties finding qualified or substitute teachers.

At second level, some voluntary secondary schools are now offering accommodation to applicants for key positions.

Shortages of teachers are most acute in subjects such as Irish, maths, European languages and science.

A report compiled by the Education and Training Board Ireland found that just one of four Irish teachers at one of its secondary schools was qualified to teach Irish.

The Association of Community and Comprehensive Schools, which represents 96 community and comprehensive schools, has also found in a survey that many of its schools are engaging unqualified personnel to teach key subjects.

It has found that there were no applicants for key positions, despite advertising and readvertising vacancies.

One principal said: “Why is Irish a compulsory subject when it is almost impossible to find a substitute teacher for this subject?”

Schools also report curtailing sports, games and other extra-curricular activities due to shortages.

In response, a spokeswoman for Minister for Education Richard Bruton said more than 5,000 extra teachers have been hired since he was appointed.

“All of these positions have been filled or will be filled very shortly,” said the spokeswoman.

She acknowledged that some schools have reported shortages in recruiting teachers in specific subjects at post primary level.

The spokeswoman added that the Minister was considering a range of measures to resolve pinch points in certain subjects and that announcements on this were due shortly.

Latest figures on applications for teaching-training courses at second level, in particular, however, show cause for concern.

Teacher unions say the trend is linked to a combination of factors such as difficulties for young teachers accessing full-time permanent posts and lower pay for new entrants.

The high cost of completing a new two-year professional master of education course – which has replaced the old one-year higher diploma – is also seen as a major issue.

The department, however, noted that the salary of a newly qualified teacher straight out of college in January 2018 will be €35,958.

“This is a very competitive graduate salary,” said the spokeswoman.