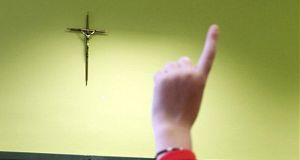 The vast majority of primary schools – just over 90 per cent – are of a Catholic ethos. Photograph: The Irish Times

The Ombudsman for Children says Government plans to partially lift the “Baptism barrier” will end up discriminating against children seeking access to minority faith schools.

Minister for Education Richard Bruton has announced plans to prohibit Catholic primary schools from giving enrolment priority to baptised children in cases where they are oversubscribed.

However, minority faiths, such as the Church of Ireland, may continue to prioritise members of their religion in order to protect their ethos in cases where they are oversubscribed, under the proposals.

Reacting to the planned measures, the Ombudsman for Children’s Office warned that allowing minority faiths to use religion as a condition of entry means some children will end up being treated differently.

“This provision would create further discriminatory provisions between children of different religions and none,” the Ombudsman’s submission states.

“A child of no religion would face different treatment if seeking admission to a Catholic school or a minority faith school,” it said, adding that use of religion as a criteria for entry to schools should be abolished.

A Department of Education spokeswoman said Mr Bruton’s proposal aimed to make it easier for parents to more easily access local schools, as well as protecting the position of families of minority religions.

“The Minister has said from the start of the process that protecting the position of minority religious families, whose position is uniquely threatened by any changes in this area, is a major priority for him, and the provisions announced thus far reflect that,” she said.

Mr Bruton’s plans to partially remove the Baptism barrier are due to be included in the Education (Admission to Schools) Bill, which is due to be enacted early this year.