The Irish Times Debate at 60: How changing topics reflected the ages

For six decades, participants in the annual event have argued burning issues of the day 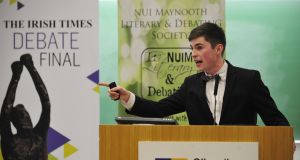 “That this house regrets the divergence of the sciences from the humanities in the modern university.”

“That people have the right to be wrong”

“That the lights are going out in Europe”

“That Ireland has nothing to offer the world”

“That Ireland’s need is socialism”

“This house would retain PR”

“That western democracy has failed”

“That politics is an honourable profession”

“That the politicians have betrayed the people”

“That western democracy cannot right the growing threat of Communism”

“That Ireland is dancing at the crossroads”

“That Ireland needs an Ayatollah”

“That the two nation theory is a cultural myth”

“That politics in Ireland has become a media game”

“That the unilateralists are the appeasers of the 1980s”

“That Band Aid is no substitute for radical surgery”

“That British justice for the Irish is a flawed process”

“That this house would be European first and Irish second”

“That this house would prefer a woman at the top”

“That investigative journalism undermines the due process of the law”

“That the natural government for Ireland is coalition”

“That this house would pay for a college education”

“That this house believes the punishment should fit the crime”

“That this house would support public funding of political parties”

“Ireland should put social justice before a Tiger economy”

“This house would deport all refugees”

“This house would call a halt to the Tribunals of Inquiry”

“This house regrets the American response to September 11th”

“This house believes that history will judge Ahern’s Ireland harshly”

“This house would tie development aid to human rights”

“This house believes the partition of Ireland should remain permanent”

“This house would default”

“This house would abolish prisons”

“This house would emigrate”

“This House believes the women of Ireland should strike to repeal the Eighth Amendment.”

“This house believes that Ireland has failed its youth”