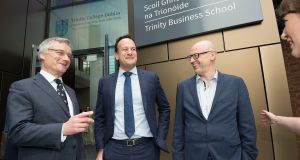 The new flagship building, which opens on to Pearse Street, was funded by a large European Investment Bank loan to be repaid over 30 years, and €20m in philanthropic donations.

The project had been brought in “on budget and on time”, Provost Patrick Prendergast said at the opening.

The building was a significant example of sustainability, Prof Prendergast told those gathered in a 600-seat auditorium.

“It’s near zero energy, with solar panels, ‘green’ walls, recycled water and fresh airflow, even the cleaning system is chemical free,” he said.

The entrance to the building on Pearse Street would help “open out” Trinity to the local community, he said.

“In 2012, when we began planning for the school, the country was still in recession, it was a scary environment for ambition,” Prof Prendergast said.

The six-storey business school “could not have happened” without the philanthropic support of business leaders and companies, he said.

The 39-year-old father-of-one fell from an altitude of 8,300m, and his family has fundraised over €250,000 to pay for a recovery search operation.

Mr Varadkar said Mr Lawless was an “inspirational character,” and reiterated the Government would “do all that we can” to help his family.

“His decision to climb Mount Everest to raise funds for Barretstown Children’s Charity, a charity that I know well, exemplifies his character,” he said.

The opening of the new business school was “part of the comeback story” of Irish universities following years of recession, he said.

“Like Trinity, as a country we reject the pessimism of those all around the world, who seem to want to turn inwards, to go back to some sort of nostalgic before-time that probably never really existed,” Mr Varadkar said.