Sonya Lennon: My journey started as a student of communications at Coláiste Dhúlaigh 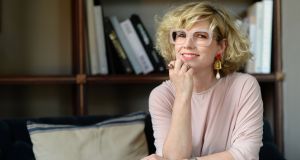 Sonya Lennon: ‘Students considering their options should go with something they – not their parents – are really drawn to.’ Photograph: Dara Mac Dónaill

CAO Countown: Sonya Lennon is a broadcaster and founder of Dress for Success Dublin, a charity that promotes economic independence for women by providing career development tools and a support network. She is a campaigner on equality for women in the workplace, particularly on addressing the gender pay gap. She is also the founder of Lennon Courtney and has 30 years’ experience in the fashion industry.

“I really liked school and was always very social. I don’t remember feeling hugely pressurised or concerned about exams, and I don’t get the flashback Leaving Cert nightmares that plague so many others. I didn’t put a lot of academic pressure on myself.

I was lucky, and I know it: I was able to get moderately good grades without a huge amount of effort. I was very creative in school and I loved art and English – hilariously, a guidance counsellor asked if I’d considered a career in nursing. I had this crazy notion that I wanted to be a fashion designer; they told me I was insane and would never make a career from it, and that it wasn’t the direction I should go.

I was in school at Loreto on the Green, where I was working to put together my portfolio to study art in the National College of Art and Design. But, in my Leaving Cert year [1986], there was a big, horrible fire that killed six nuns and, as it turned out, I lost my entire portfolio. The deaths were devastating and, of course, put things in perspective for me. What could I do except look for alternatives?

I’ve always been practical like that. When I was eight, I got a kitten for Christmas, but the kitten died the next day. I was sad but I wanted to learn from it, so I went to the library to learn more about kittens; it said that kittens don’t always thrive in the winter – the replacement kitten was summer-born.

As it was too late to redo my portfolio – and I didn’t have the heart for it anyway – I looked into what other options I had.

I probably could have done a lot better in my Leaving Cert. I did okay, but it just wasn’t a huge priority for me at the time. I think, on some level, I knew that college and a degree wasn’t my goal.

I went through the motions anyway. I applied to the CAO. I was offered arts in UCD and my parents wanted me to take it. I flat-out refused. I went to do a [post Leaving Cert] course in communications at Coláiste Dhúlaigh College of Further Education. I really enjoyed it. It was broad-based and included photography, video and TV production and it made me understand my one superpower: communications.

After that, I went to apply to IADT in Dún Laoghaire, but I managed to apply for the wrong stream: instead of TV and film I applied for graphic design. So I ended up with neither. And that left me at a loose end: what was I supposed to do next?

I went off to Paris for a year, teaching English as a foreign language. Like any 20-year-old in Paris, I had a ball, but I was becoming more mindful of what would happen at the end of my time in France. I had spent a summer working in fashion retail jobs and I became even more obsessed with fashion. I knew it was the area I wanted to work in and I knew that I was developing great skills, including working on teams and also selling.

I was coming to understand clothes, women’s bodies and how the clothes work on the rail. A notion was forming: I was interested in the public relations course in Rathmines and I realised I could specialise in fashion PR.

Fashion PR? This was the early 1990s. Fashion PR wasn’t really a thing, but I’d been devouring fashion magazines like Vogue and The Face.

I got called for interview and I think they were interested that someone came in with a left-of-centre strand. I got the course, did it, loved it. After, I went back to fashion retail and became aware of the various stylists coming in and out, borrowing clothes for fashion shoots. I knew I wanted to do the same.

Through a bit of raw talent and a lot of perseverance and networking, I became fashion editor at D-Side, producing two shoots a month, with a lot of other work along the way. I was honing my craft and slowly but surely getting paid work.

So, for 20 years, I was commercial stylist working on films, commercials and international campaigns working with amazing directors like Lenny Abrahamson and Julien Temple. I had a ball and became a talking head on TV and, in 2008, I was asked to screen-test for the fashion magazine TV show Off the Rails. I had a good stable of clients and loved my job, so I was cautious about risking that, but I realised that a prime-time TV gig was too good an opportunity to turn down. I went for it: the worst that could happen is that I’d hate it and, if that happened, I could walk away.

This buoyed my confidence and I founded Dress for Success to support women into employment and economic independence, in turn this has made me realise that unless my career decisions are motivated by empowerment, improvement and confidence, they’re not the right ones. Students considering their options should go with something they – not their parents – are really drawn to. You should have three main considerations: Do I love doing this? Am I good at doing this? And can I make money doing this? There you will find your career sweet spot.”

- In conversation with Peter McGuire