Schools which fail to consult parents may be ‘named and shamed’

Law to set up ‘customer service charter’ may not, however, commence for another two years 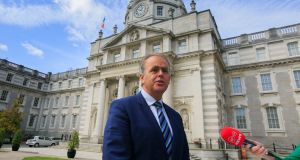 Minister for Education Joe McHugh TD during the announcement of the publication of new legislation which will allow for a stronger complaints procedure and charter for parents. Photo: Gareth Chaney/Collins

Schools which fail to consult with parents and pupils over issues such as school uniform costs face the threat of being “named and shamed” under new legislation.

On Tuesday Minister for Education Joe McHugh published the Education (Student and Parent Charter) Bill 2019, which he said is akin to a “customer service charter” for how schools should engage with students and their parents.

The overall approach is to shift away from reacting to problems in schools by developing a “listening culture” in the school through inviting feedback, comment and observations from students and parents.

The legislation was first promised by Mr McHugh’s predecessor, Richard Bruton, in 2015.

While a Bill has now been finally published, it may take up to two years before the legislation will fully commenced, Mr McHugh conceded.

Under the law, every school will be required to publish and operate a “student and parent charter” which will declare to students and parents what they can expect from the school.

These charters will operate in accordance with national guidelines which will be published by the Minister following consultation with education partners.

They are likely to require schools to overhaul complaints procedures and consult with parents on issues such as school uniform costs.

In cases where a school board is failing to comply with the law, the minister may issue a direction to school setting out remedial action that needs to be taken.

These directions will be published on the Department of Education website along with the name of the school.

Mr McHugh said it was critical that schools were as positive, responsive and supportive as possible for students and their parents.

“This new legislation will be an important step towards improving the experience of both students and parents in their engagement with schools,” he said,

“It will give mothers, fathers, guardians and the children in our schools a fair and clear system to make sure their voices are heard.”

He said legislation will also introduce a stronger complaints procedure and charter as it includes a requirement for schools to follow standardised procedures in dealing with grievances of students and their parents.

“It will be similar to a customer service charter. Students and parents will know first-hand what they can expect from the school, how they can effect change and how they can influence and respond to school policies and practices,” he said.

While many schools already engage with students and their parents very well, he said that for others the new measures will amount to a “radical shift” in how our schools engage with the community.

“Key to it will be a new focus on allowing students and parents’ views to be heard and to prevent issues arising while also ensuring the need for schools to address and resolve concerns as far as possible, at an early stage, and to ensure that grievances are dealt with efficiently, effectively and fairly, and as far as possible, in an informal manner,” he said.