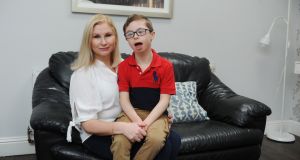 Sharon Saunders from Kingswood in Tallaght with her son Scott (9) who has Down syndrome and is on a reduced school timetable. Photograph: Aidan Crawley/The Irish Times

Scott Saunders is in third class but finishes school at the same time as the junior infants.

The reduced timetable, says his mother Sharon, is down to the fact that he is not in a school placement that meets his needs.

Scott (9) has Down syndrome and a moderate learning disability.

He craves routine and structure and he needs a range of therapies to help him to communicate.

Within days of starting school, it was clear Scott could not cope in a mainstream classroom with dozens of other children.

“He was getting very stressed,” says Ms Saunders, from Kingswood in Tallaght, Co Dublin. “He didn’t want to go [to] school. His attitude and behaviour changed dramatically.”

His school said it was not able to cope with his level of need and placed him on a reduced timetable of just an hour a day.

“It wasn’t working out. He was barely in the door of the school and he getting ready to leave again,” says Ms Saunders.

Scott is one of thousands of children estimated to be on short school days, according to new research.

The study estimates that as many one in four children with disabilities – and on in three with autism - are being “suspended” through the use of short school days.

The report, Education, Behaviour and Exclusion: The Experience and Impact of Short School Days on Children with Disabilities and Their Families in the Republic of Ireland, is due to be published on Thursday.

It includes a poll of almost 400 parents of children with disabilities, conducted by academics for Inclusion Ireland.

The research found the average short school day lasted only two to three hours, with many children forced to attend school for less than an hour a day.

It found the proportion of pupils with disabilities on reduced timetables rises to one in three for children with autism.

“Children are being denied their right to education because of the lack of acceptance and accommodation of their differences,” according to the report’s lead author, Deborah Brennan of Technological University Dublin. “Many parents told us they are being forced either to accept a short school day or to remove their child from school.”

The report says it is clear from research that shortening of school days and suspensions are in many instances illegal, and are often damaging to children, socially, emotionally and educationally.

In Scott's case, his mother said the short school day was stressing him and the family.

She moved him to a different primary school about a 20-minute drive from their home, which had a special unit of five children with Down syndrome.

Here, she says, staff at the school were experienced in helping children with additional needs.

“It was wonderful,” says Ms Saunders. “Things settled down very well. He has a great routine. I couldn’t fault the school at all.”

At the start of summer she received a phone call to say the unit was closing: the other children were moving on.

The school said its hands were tied; the decision had been taken by the local special education needs organiser.

Since September, Scott is back in a busy, mainstream classroom, which does not meet his needs, says Ms Saunders.

The shortened school day is a temporary measure to see if he can cope – though Ms Saunders is fearful for the future.

“He had an appropriate school place which was taken from him. I’m told the decision has been made high up. But what about him? Does he have any rights?”