Schools get green light for online job interviews with teachers 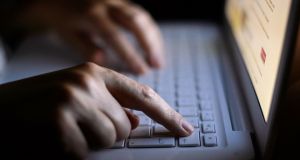 Schools have been given the green light to conduct job interviews with teachers in the Middle East and elsewhere via Skype under changes introduced by the Department of Education.

The move comes as school management bodies and teachers’ unions warn of a “crisis” in teacher supply which threatens to undermine the quality of children’s education.

Thousands of Irish teachers are based in countries such as the United Arab Emirates but are often reluctant to return home for interviews when there is no guarantee of getting a job. Until recently, official recruitment and appointment procedures did not allow for job interviews to take place using video conferencing.

Sources said there had been concerns raised about whether online interviews would be fair and transparent, and whether candidates could be prompted off-screen.

However, in light of teacher supply problems, the department has recently revised these rules to explicitly allow school boards to conduct job interviews online for the first time.

The revised rules state that schools or education and training boards may “decide at their discretion to facilitate interviews using digital technology, particularly in the case of qualified applicants resident outside the State, subject to the availability of suitable technological infrastructure and resources”.

There are an estimated 2,000 Irish-qualified teachers working in the United Arab Emirates alone. There are also significant numbers in the UK, China and other Asian countries.

One school management source said the move would help open up the pool of potential candidates for primary schools based in the greater Dublin area, who are struggling to hire qualified teachers. Some schools are struggling to attract interviewees for key posts and claim it is often impossible to secure substitution cover.

Another school management source said while the move was positive, problems accessing reliable broadband would be an issue for many rural schools.

The move follows a visit by Minister for Education Joe McHugh to the United Arab Emirates earlier this year, where he heard first-hand from teachers in a series of town-hall-style meetings. A poll of these teachers at the time revealed that an overwhelming majority felt the quality of life was better abroad.

Salaries, pay inequality for new entrants, housing costs and a lack of permanent teaching posts were cited as the main barriers to returning.

Despite this, about half said they planned to return to Ireland to teach within the next three years or so, while just 10 per cent said they would not return.

Mr McHugh has recently introduced a number of measures aimed at easing supply problems such as teacher-sharing for “priority” subjects in secondary schools; expanding the numbers in initial teacher education courses; and the development of an online teacher recruitment portal to match available teachers with short-term substitute vacancies in primary and post primary schools .

In addition, the Teaching Council is examining ways to reduce red tape when hiring teachers who have qualified abroad.