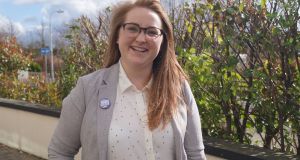 Síona Cahill (25), from Longford, is the new president of the Union of Students in Ireland (USI).

The current deputy president of the Union of Students in Ireland (USI) has been appointed president for the 2018-19 term at the annual congress in Galway.

After her election, the Longford native said “students will be a force to be reckoned with in the battle ongoing about the future and current funding of higher level education in Ireland.”

“It’s time the Oireachtas reveal which model they recommend before our entire educational landscape collapses. With the Technological Universities enshrined into law, we must protect Students’ Unions and their ethos by working closely with allies in other unions. At all levels of higher education, we must ensure students are at the centre of decision making, and we must resist absolutely the commodification of education in Ireland,” she said.

Ms Cahill said the housing crisis is pricing students out of accommodation and that she will try to tackle the issue during her term.

“Students are waiting up to six weeks to maybe see a counsellor on campus. It is the very basis of our movement that we create the space to criticise and improve the systems we interact with as students. This will be a core battle into next year, and I am committed to it,” she said.

The USI represents over 374,000 students across Ireland.