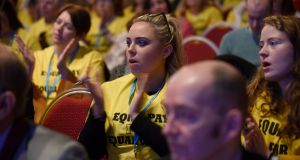 Two primary school teachers have brought the Government to the European Court of Justice over the issue of unequal pay.

Claire Keegan and Thomas Horgan, members of the Irish National Teachers’ Organisation (INTO), took the case, which will soon be heard, on the grounds of age discrimination, and are being supported by the union.

The challenge comes following a decision by the Labour Court to refer key questions to Europe on the system, which sees teachers appointed after 2011 placed on a permanently lower payscale than their colleagues.

About 60,000 public workers, including 24,000 teachers, are affected by the policy on payscales. The Government says it could cost €200 million to address the different pay rates.

The three teacher unions say they will ballot for industrial action unless the Government makes significant progress on the issue by next month.

INTO general secretary Noel Ward said the union’s submission to the European Court will show, using the Department of Education’s own figures, that 75 per cent of new-entrant teachers in 2011 were aged under 25.

Addressing delegates at the union’s annual conference in Killarney, Co Kerry, Mr Ward said that lower-paid teachers were distinguished by their age.

“Less pay for new entrants equals less pay for younger teachers, and the EU has to tackle that kind of unfairness,” he said. “What we are working for and hoping for is that the courts will call pay inequality what it is: unlawful age discrimination.”

The conference also heard that a shortage of substitute teachers is causing a difficulties in schools across the State and could threaten long-term education standards if not addressed.

Pat O’Sullivan, a delegate from Mallow in Co Cork, said he knew of a school that had to close for two days because of a lack of available substitute teachers.

Delegates called for the re-establishment of teacher supply panels, which were established in 1997 and abolished in the 2010 budget during the recession despite a review finding that the scheme worked well. The 2006 review also found that while the panels resulted in additional costs, their abolition would cause issues in finding substitutes.

Delegates heard the lack of opportunities for substitute teachers was causing many young graduates to emigrate and that the rental crisis in urban areas, particularly in Dublin, was making it hard and unattractive for teachers to live there.

Mary Curley, a teacher from Co Clare, said that panels would provide regular, valuable work for teachers and would end a headache for the principals who have to scramble to find a substitute at short notice.

Separately, the conference heard from Bernadette McCloskey, principal teacher at St Thomas’s Education Centre in Coolock, Dublin, about how children from the Traveller community are treated in the education system.

She said that a decision in 2011 to abolish resource teachers and visiting teachers for Travellers should be reversed.

“Every child deserves the chance to go to university and some of our children have gone on to do the full Leaving Certificate and even get into Dublin City University, but we get little or no level of adequate support ... and our positive contribution to the lives of these children is not getting any recognition.”

Teachers also unanimously adopted a motion in support of school children in Palestine and offered support to the Irish Congress of Trade Unions’ campaign on the issue.