INTO conference: ‘Children get smartphones way too young’ 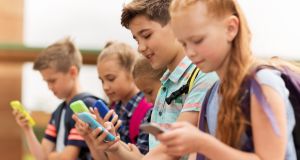 Parents and students will soon be consulted on whether smartphones should be allowed in schools. Image: iStock.

Parents and students will soon be consulted on whether smartphones should be allowed in schools. Minister for Education Richard Bruton is to issue a circular to all schools asking them to decide if the devices should be permitted on their premises and, if so, in what circumstances.

But what do teachers think? We asked delegates at the Irish National Teachers’ Organisation’s annual conference for their views on the issue.

“We don’t allow children – or teachers – to have smartphones in class. If they do need a phone for after school, they’re asked to leave it in the office. They’re used to this rule and they know that, if they break it, their phone could be confiscated.

“We do use technology in school but we have lots of filters on our systems. This can be a pain when we’re trying to use YouTube for class but our teachers might use their own computers for this.

“Children are getting smartphones way too young, sometimes as early as senior infants. There is so much inappropriate material on the internet and I don’t think parents are fully aware of what is out there. And actually the children need a break from it.

“They’re spending so much time online, sometimes as much as eight hours a day. This is really concerning because we can see how it impacts on their physical activity, and they can be exhausted in the morning.

“Children can be a lot more tech savvy than their parents these days, so we recently linked up with Donegal Youth Services for a talk about online safety. Parents were shocked with what they learned, and many changed their minds on smartphones afterwards.”

“We simply don’t allow phones in school and we have this rule in place long before smartphones were introduced. The rule is that, if they need a phone for after school, they have to leave it in the office and they get it back when the school day is over.

“There can be rows about this policy, including rows with parents. But we reassure the parents that, if they need to contact their child, they can phone the school; they all have the number. And if a child wants to phone home, we always allow them to do so.

“The plan to ask parents for their views on smartphones is, in general, more relevant to post-primary schools. In primary school, the biggest issue with phones in the classroom is generally the distraction and the nuisance it can cause, although teachers across the profession are starting to see cyberbullying become an issue in fifth and sixth class.”

“In our school, we don’t allow phones to be turned on during the school day, and we know from Bluetooth if any of the students are disobeying this. They are a distraction from teaching and learning. We don’t allow phones at lunchtime either and instead we invested in basketballs and footballs, because when children are active they are both healthier and more engaged with learning.

“Parents increasingly want to be able to contact their child immediately, but if they need to they can go through the school, and this works better than them just showing up at the school gate.

“But phones can be a really valuable tool for teaching and learning; modern phones work faster than the computers most schools have. I’ve seen students in, for instance, history class who can use their phone to deliver a Powerpoint presentation; and there are useful gadgets that allow phones connect up to data projectors.

“Our students with special needs have iPads with great apps and programmes to help them learn. I’ve seen schools which use QR codes to communicate with parents; the parents can scan the code and see what homework the children have to do.”