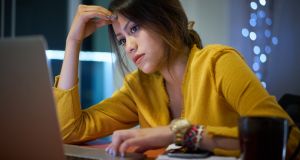 Counsellors say numbers seeking therapy or counselling have surged since 2010, from 6,000 students to well over 10,000 last year.

The latest set of figures – which relate to the 2016/17 academic year – are likely to significantly underestimate the scale of demand given that data is still being compiled from a quarter of higher education institutions.

They come at a time of growing concern over the rate of anxiety among pupils at primary and second-level, as well as third-level.

Anxiety was the single biggest issue of concern among students last year, accounting for 40 per cent of all those seeking counselling.

Counsellors say they believe social media is playing a key role by amplifying stressful events such as relationship break-ups, disagreement with friends and long-term effects of school bullying.

However, they caution that a range of other factors may also be at play, such as increased awareness and openness around mental health issues, along with social issues such as the impact of the economic crash on families, the cost of rent, pressure to succeed in college and thwarted expectations over employment or home ownership.

An inability to problem-solve or cope with normal life challenges, alcohol and substance misuse, acting out in class or with peers, along with self-harm or suicidal thoughts or actions are also common issues.

“Anxiety issues are showing more in lecture theatres and in practicals, so another substantial part of our work is to provide consultation and guidance to academic staff who encounter this in their daily interface with students,” she said.

An estimated 190,000 students are registered in higher education, with one counsellor for every 3,000 students.

“Funding of student counselling services has not kept pace with the year-on-year increase on demand for services,” Ms Fox said.

“When coupled with increased complexity of presentations, and ever increasing levels of self-harm and suicidal risk among this population, the provision is out of kilter with what’s needed.”

She said underfunding means many students may not be able to access support for several weeks.

“We need more full-time staff, to continue the institution-wide work, and funding to increase provision when demand increases,” she said.

The Department of Education says it has increased funding for higher education in recent years, following almost a decade of cuts.

This includes a new PRSI levy on employers that is set to further increase funding for the sector over the coming year. * Are you in crisis? The Samaritans run a 24-hour free phone support line (116-123) , while the HSE has details of out of hours services (www.hse.ie)