Pupils step back in time at country’s oldest primary school 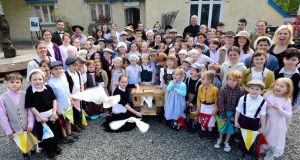 Pupils at one of the country’s oldest national schools stepped back in time on Friday – kitted out in cloth caps, short trousers and high-collared blouses – to celebrate their school’s 200th anniversary.

A few years ago, pupils at Powerscourt National School in Enniskerry, Co Wicklow, moved out of the original schoolhouse to a brand new, passive-energy building on the edge of village.

On Friday they marched back down the hill to the old building in period dress to mark the occasion.

The school, established in 1818, pre-dates the establishment of the national school system in the 1830s.

It was built by local landowner Lord Powerscourt who was inspired by a local movement to provide education for the country’s poor.

“Generations of children attended the old schoolhouse. It was oldest school in continuous use up until 2012,” says school principal Stephen Middleton, clad for the day in smart jacket and fetching bow tie.

“We’re in a beautiful, modern school now, but we’ve kept that same sense of community. This has been a celebration for the entire village.”

This was one of series of events organised by staff, parents and the wider community this week to mark the anniversary. Events include a grandparents’ day, historical talks, church service and burying a time capsule, the contents of which may puzzle future generations when opened. It includes today’s children’s must haves such as a fidget-spinner, slime and smartphone.

The school came into being at a time when education was largely reserved for the most wealthy. But a small number of parish and hedge schools were scattered countrywide.

Lord Powerscourt paid the salary of the school headmistress, while local children were expected to contribute about a penny a week if they could afford it. Voluntary contributions, it seems, have always been a feature of Irish education.

The school was later absorbed into the national system in the 1860s. And under the patronage of the Church of Ireland local children, mostly Protestant, were educated.

These days a large proportion of the school’s 92 children are still Protestant, though there are a variety of other faiths and nationalities.

“We’re very much open to the entire community,” says Mr Middleton. “We’re also very lucky. It’s very scenic, with beautiful views of the Wicklow mountains, while we’re close to Powerscourt Estate, which is great for nature walks for the children.

“We’re fortunate, too, that we’ve the full support of parents, grandparents and locals who attended the school, whether it was five years ago of 50 years ago. We’re still at the heart of the community effort, at a time when that’s no longer the case in many parts of the country . . . We don’t see that changing in the future.”