Q&A: What are the implications of the Leaving Cert appeals ruling?

Reforming an outdated system presents a huge headache for policymakers 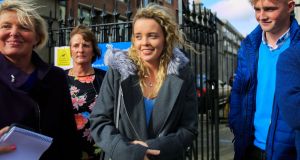 Rebecca Carter of Castlebridge in Co Wexford leaves the High Court in Dublin after successfully challenging the State Examinations Commission’s decision not to re-check her points score in time to allow her obtain a place at UCD. Photograph: Gareth Chaney Collins

Why are the State exams being reviewed?

On Thursday, the High Court ruled in favour of an 18-year-old student, Rebecca Carter, who argued that she was being denied a place in her veterinary medicine course at UCD because her Leaving Cert exam marks had been totted up incorrectly.

Ms Carter – who had repeated her Leaving Cert – was not due to receive the formal results of her appeal to her grade until mid-October, after the cut-off date for entry to the veterinary medicine course. If the points had been totted up correctly, she would have qualified for the course.

In his ruling, Mr Justice Richard Humphreys said the current system was not “fit for purpose” and directed that it should not happen again. The Government has since pledged to review the system.

Why do students have to wait so long after appealing their results?

The system is hopelessly outdated at a time when so much elsewhere is done on computer or online.

Students write on reams and reams of paper, which is relocated to a central sorting office.

The exams are then physically distributed to thousands of examiners scattered across the country. After a few weeks of correcting they are returned to a central office.

When the results are announced in mid-August, the exam papers are relocated to schools to allow students to view their scripts at the end of the month. If a student appeals, the script is then sent to an examiner to regrade.

All of this means that it can be two months before a student gets the result of their appeal.

How many people are likely to be affected by the ruling?

It’s hard to say for sure. About 5,000 students annually appeal their grades in respect of about 9,000 exam papers. Typically, about one-in-five students is successful in securing an upgrade. It is difficult to say how many of these are eligible for new courses on foot of these upgrades.

In any event, sweeping changes will be needed to the system ahead of next year’s exams.

Surely, a simple error like totting up of marks can be corrected within days?

You’d think so – but it’s a bit more complicated. There is scope to regrade a paper outside the appeals process where there is an obvious administrative error. This can be done within a short period of time.

However, this process – called “rectification” by the commission – is generally only in cases where the totting up error appears on the front cover of the exam script.

The marking scheme can change during the grading process in order to ensure results fit into a “bell curve”, aimed at ensuring there is a similar proportions of As, Bs and Cs in a given year.

Why does the ruling threaten to put the exams system in “chaos”?

That's a matter of debate - though it's clear the system of correcting the State exams is already under strain. The State Examinations Commission has been struggling to hire qualified teachers to correct the exams during the summer.

In fact, this year it was forced to rely on a small number of non-teachers and teaching students with little or no experience of the curriculum. Speeding up the process would most likely require even more examiners – and it is difficult to see where they can find them.

The State Examinations Commission has started scanning in papers for a small number of subjects, which are then corrected by examiners online.

There are plans to extend this to a wider number of subjects. While it may help speed up the process, it’s highly uncertain whether it could shorten it from months to weeks, which seems to be the direction of the High Court.

So, what are the potential solutions?

The State Examinations Commission could appeal the ruling - though politically it would look bad. Most students feel huge sympathy for students such as Rebecca Carter.

The most obvious solution is to try to speed up the appeals process, while getting colleges to extend their window of allowing successful appeals students onto their courses. This would require the commission and colleges to work together.

It sounds simple - but colleges would prefer not to take students onto courses weeks after they have begun.

Given that authorities has been struggling to hire examiners, it would most likely need to pay more. Unions are seeking a pay hike of up to 30 per cent for correcting.

Either way, reforming the system presents a huge headache for policymakers which will need to be resolved in a relatively short period of time.