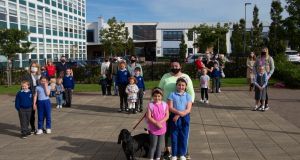 A group of parents protest over an end to sibling-first policies outside Our Lady’s Grove National School in Goatstown. Photograph: Laura Hutton

Jamie Tratalos and his partner, Lara Byrne, breathed a huge sigh of relief last year when their daughter secured a place in junior infants at their local primary school in Goatstown, Dublin.

They had applied to five schools in their local area, all of which were heavily oversubscribed. After a nervous wait, they received a single offer.

“I think we got one of the very last places in Our Lady’s Grove National School, ” says Tratalos. “We were delighted. At least with the school’s sibling-first policy, it meant that we wouldn’t have to go through all that stress again with her younger brother.”

A few weeks ago came a shock: the school had been instructed by its patron, the archdiocese of Dublin, to end its sibling-first policy.

Their son, who is due to start junior infants in 2021, would no longer be guaranteed a place in his sister’s school.

“It was like the rug was pulled out from under us,” says Tratalos. “We were very happy that they’d be able to go to school together. Now, we’ve no idea whether he will be able to get a place and how we’ll manage if they have to go to different schools.”

Byrne adds that many other oversubscribed schools in the area – such as the local Educate Together and a Church of Ireland school – have retained priority for siblings in their policies.

“I’ve looked at all the schools within a semi-reasonable commuting distance of our house. All of them, when you consult their 2021 admissions notices, have been oversubscribed to a factor of two, three or in some cases much more.

“Oversubscription and the fact that polices now differ from school to school make it extraordinarily difficult for parents to navigate the school admission process to secure a place for a child entering junior infants.

“It’s an untenable situation for parents to find themselves in. And a system which will in all likelihood necessitate many parents sending their children to different schools is unnecessarily disruptive for children, families, school communities and local communities. How are we all expected to cope?”

Many other families in similar situations are facing a nervous wait. Catholic primary schools across the Greater Dublin Area have been instructed to end the practice of giving priority enrolment to siblings of pupils currently attending school.

The archdiocese of Dublin – the patron body for almost 90 per cent of schools in Dublin, Wicklow and parts of Kildare, Carlow, Laois and Wexford – has asked its primary schools to update their admissions policies accordingly.

Under the standardised admissions criteria, the estimated 400 schools in the region must all give parity to all children in the local catchment area alongside children of siblings.

The changes are coming into effect for children enrolling in the 2021-2022 school year. (Some Catholic schools that have waiting lists of students have a window of up to four years to phase them out before the policy is fully implemented.)

A spokeswoman for the archdiocese insists that the policy being applied across schools has been its position for many years.

In practice, however, many schools say they have been operating sibling-first policies for many years without complaint from the archdiocese .

The spokeswoman says the idea behind the policy was that a “parish school is established for the children of the parish”.

“The diocesan policy is in place to ensure that siblings and children of the parish can be educated in their local primary school. The majority of Catholic primary schools in the diocese have successfully operated the policy,” she says.

“There are some schools in the diocese that have children outside the parish on the school rolls. It has been the case in these schools that local children cannot get a place because the schools give priority to siblings who are not resident in the parish. This has obviously been a cause of stress to parents who have to look for a school place far from their locality.”

She acknowledges, however, that there is no easy solution to the issue.

“In order to be just and fair to all families, placing of siblings and step-siblings and children of the parish in category one, giving priority to the eldest child, is the most reasonable and transparent process for the schools under Catholic patronage when schools are oversubscribed,” she says.

But many parents , are not satisfied with the explanation. They say a simple adjustment to admissions policies to prioritise siblings in a catchment area would solve this issue.

A committee of concerned parents and members of the parents’ association of Our Lady’s Grove Primary School in Goatstown wrote to the archdiocese this week.

Like many schools in the south Dublin area, it is oversubscribed. Last year it received 123 applications for 58 places in junior infants. Of those 58 places, 30 went to siblings of existing pupils; the remainder went to children in the catchment area.

Of the siblings offered places, there was 100 per cent take-up. Of those children in the catchment area, there was a 59 per cent acceptance rate.

The concerned parentsgroup says it is inevitable some local families living in the catchment area with siblings in the school will end up being refused a place under the new policy.

As a result, it says, parents will be faced with sending their children to different schools, “disrupting family life, eating into precious family time in undertaking multiple school drop and pick-up journeys, preventing siblings from offering mutual support at school, and incurring additional cost in respect of buying multiple uniforms/sports equipment/books without capacity to reuse them”.

In addition, it says, many siblings who were due to start school next year are in their final year of pre-school and find themselves at the back of the queue for admissions to most other local schools.

Do these parents “leave their child in preschool for another year, if they can secure a place at this late notice, where the child will repeat day-by-day an entire year of learning and which will also impact parents financially as ECCE [Early Childhood Care and Education] funding will already have been allocated for the previous two years?”

The prospect of children going to different schools will have a direct impact on parents’ relationships with schools, it adds, which are “vital to creating communities and the support of fundraising, volunteering, participation on parents’ associations”.

“We recognise that you are acting in the best interests of local children, parents and schools and hope that this direct feedback will be helpful to you,” states the parents’ letter. “Our aim, like yours, is to work together to ensure that every child is admitted to a school within their local area, and that their siblings may also attend.”