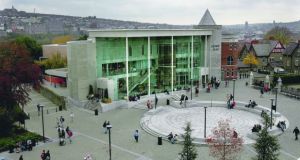 In a statement UCC say that the vast majority of students have been adhering to national public health guidance. File photograph: Matt Kavanagh

University College Cork (UCC) has confirmed that 11 students have been temporarily suspended following breaches of rules.

The temporary suspensions have been put in place pending the outcome of a hearing, as per the Student Rules.

In a statement UCC say that the vast majority of students have been adhering to national public health guidance.

“However, UCC can confirm that Campus Watch has received some complaints pertaining to alleged breaches of Student Rules. Every case is considered on its merits and the principle of natural justice applies.

Hearings for those complaints not already resolved by Campus Watch through the informal procedures of the UCC Student Rules have yet to be held and UCC therefore is not in a position to comment further on these ongoing cases.

UCC can confirm that in 11 cases a temporary suspension has been put in place pending the outcome of a hearing, as per the Student Rules. These have been made without prejudice to the hearing process.

Over 50 support services are in place to support students at this time and UCC will continue to work together with its students, its community and the local authorities at a challenging time for our society.

The Chair of Campus Watch, UCC’s Director of Student Experience, considers whether the complaint should be handled by the Campus Watch Committee or by the Student Disciple Panel.

The Campus Watch Committee, comprised of UCC staff and members of the Students’ Union, primarily hear less serious complaints of alleged breaches of these Rules and will encourage informal resolution and mediation wherever appropriate.

If a student has breached college student rules, the student may have an option, in the first instance only, of an informal resolution.

Their options may include completing the in-house educational Bystander Intervention Programme and the Alcohol Education Programme, or completing just one of these two programmes and paying a €25 charitable contribution instead.

Any student who opts out of doing either of these can pay a €75 charitable contribution instead.

UCC says that Campus Watch and and Student Discipline committees are meeting daily at this time.

“Should a complaint go to hearing and be found proven upheld, the Discipline Committee can impose penalties as laid out by the student rules. These options include fines, suspension, removal of library and/or computer facilities, prohibition to access to campus for a determined period or, in cases of a serious breach of Student Rules, expulsion. Students have a right to appeal the decision of the Disciplinary Panel.”