Anywhere from a few hundred to 1,000 new college places may be needed, writes Carl O’Brien 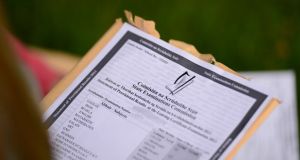 Minister for Education Norma Foley says “every effort” will be made to ensure these students can start in the coming year, and higher education institutions have said they do their best to accommodate students. Photograph: Bryan O’Brien

How many students, exactly, are affected by errors in the Leaving Cert calculated grades system?

The precise number of students who will receive higher grades will not be available until a series of verification checks are completed. However, the Department of Education says its likely to be in the region of 6,500.

No student will receive a reduced grade in any subject as a result of this process.

How many students will be entitled to higher CAO preferences on foot of this?

It’s hard to say for sure. Normally, just under one in five students who get upgrades are entitled to a higher preference course.

This means, in theory, that about 1,300 students could be entitled to a higher preference college course.

In reality, the number will be smaller on the basis that not all students affected have applied to go to college; some will already have secured their first preference course; and some who are entitled to a higher offer may opt not to accept it.

At a guess, anywhere from a few hundred to up to a 1,000 new college places may be needed for these students.

Will upgraded students be able to take up a higher preference course in the current academic year?

The Department of Higher Education is to work with the CAO and third-level colleges to ensure these students are offered higher preference courses, where relevant.

Minister for Education Norma Foley says “every effort” will be made to ensure these students can start in the coming year, and higher education institutions have said they do their best to accommodate students.

It remains to be seen, however, if students who qualify for very high demand courses such as dentistry and medicine will be able to take up these courses this year, given that many have reached maximum capacity.

When will students know whether they have been upgraded?

The Department of Education will contact students who will be receiving the improved grades as soon as all the checks are completed. This is likely to take several days.

It will send a corrected file of student results to the CAO so colleges can determine if a student is due a new offer and to do everything possible to facilitate their admission.

Any student who would have been entitled to a different offer in previous CAO rounds if they received the correct grade on September 7th last will receive this offer or a deferred offer as soon as possible after the updating of results.

How did the error occur?

Two errors were discovered in the coding used to implement the standardisation process, which adjusted teachers’ estimated grades up or down.

The first error was in a line of code programmed by an external contractor, Canadian firm Polymetrika International Inc.

The error affected the way in which candidates’ Junior Cycle results were included in the standardisation process.

It was intended that the students’ aggregate Junior Cycle results in Irish, English and Maths would be included in the data used by the national standardisation process, together with their two best other subjects.

This was aimed at building a picture on the likely performance of an individual class in the Leaving Cert.

However, the error meant that students’ results in their two weakest subjects ended up being used.

Was that the only error?

No. A second error was discovered while performing checks related to rectifying the first error.

It meant Junior Cycle results for the subject Civic, Social and Political Education (CSPE) were included in error in the data mentioned above. This subject was not supported to be used in the standardisation process.

So, what happens now?

The errors are being rectified and the process is being re-checked with a series of independent checks now underway.

A US firm ETS Educational Testing Service, which specialises in educational measurement, is reviewing aspects of the coding.

Once this is completed, the department says it will have full information on which students will benefit from the improved grades and the specific subjects involved for each student.

What can students do in the meantime?

Not all that much besides wait for the revised results. The Department of Education has put in place a helpline and email address to answer queries from students.