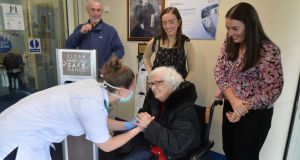 Maire Walsh, age 94 Years with her son Padraig and grand daughters Anna and Eva Walsh thanking Intern Nurse Sophie Lynch for her care after winning her battle against Covid-19 and being discharged after 43 days at St Michael’s Hospital in Dun Laoghaire, Dublin. Photograph: Alan Betson/ The Irish Times

When 94-year-old Maire Walsh lost her appetite and her desire to cook meals for herself at the end of March her family were concerned but not overly so. Her sense of smell and taste also disappeared.

While it is now widely known that a loss of smell - and consequently taste - are key early indicators of Covid-19 infection, the knowledge was not so common back then.

“She has always been great for cooking her own dinners but then she just lost her appetite,” her granddaughter Eva Walsh said. “I think if you can’t taste food, then you don’t really want to eat it.”

A few days later, Maire grew disoriented and confused, something which the family recognised as being highly unusual as she had been hugely independent. On April 3rd, an ambulance was called and she was brought to a hospital for the first time since she had given birth to her youngest child half a century earlier.

“When we brought her into hospital to be checked out we had no idea it was going to be Covid. We were definitely really scared,” her granddaughter said. Although the family were afraid, they were also “sure she would pull through because she is just that kind of person”, Eva continued.

And what kind of person is she? Her son Brendan took up the story from his US home by email.

“My mother was born on April 6th, 1926. Growing up in Drimnagh Road Crumlin as an only girl in the family, she was lucky to have three incredible, funny and loving brothers.”

She married Kevin Walsh in 1958 and “had to give up her job at Dunlops because that was the law then, even though she made three times more money than my dad.

“I’ve always thought that my mum was ahead of her time: ambitious, determined and extremely competitive in everything she does. She would’ve been CEO of a large multinational corporation if she were born 40 years later!”

She was admitted to hospital three days shy of her 94th birthday. “None of us could travel to visit mum,” Brendan said. “There were days when I feared the worst. After all, a 94-year-old doesn’t seem to have a chance when it comes to fighting this vicious virus. It broke my heart to think of her laying in bed all by herself in a windowless room, waging a lonely battle against the virus, and never knowing if she would ever get out alive.”

But she beat the virus and at midday on Friday she left St Michael’s Hospital in Dun Laoghaire after a 43-day fight.

Eva was there to bring her home. “She is really good, she’s in great form,” she said.

The woman of the moment went even further. “I’m feeling wonderful,” Maire told The Irish Times. “I can’t believe it, I’m just so happy to be home.”

She was full of praise for the hospital staff who, she says, kept her company while she recovered and kept her up to speed on her progress and when she might be able to go home.

When asked what her plans from were for the weekend ahead she said she was simply looking forward to being with her family “and doing whatever they tell me to do, I’m going to be treated like a little child now”, she laughed. “I think they even have a cake for me too. I’d love to share it with everyone.”