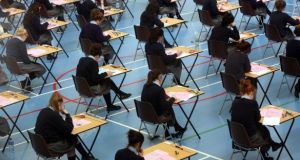 Plans to hold the Leaving Cert exams in the summer have been cancelled and students have the option of receiving calculated grades instead. Photograph: Dara Mac Donaill

Tuition for all Leaving Cert students has ceased and students are now banned from discussing their grades or class rankings with their teachers, the Department of Education has confirmed.

Classes officially ended on Monday, May 11th, and students are being instructed not to submit any further work to teachers. Any attempt to contact teachers about grades will be regarded as “canvassing”.

While tuition has ceased, the department says Leaving Cert students remain students of their schools until the end of term and their “wellbeing should be supported in line with department guidelines on the role of the student support team”.

The department has advised that any attempt to influence teachers in relation to the calculated grades process will be considered to be “entirely inappropriate and will be regarded as canvassing”.

In addition, officials are understood to be working on a “protocol” which is likely to state that any canvassing in relation to the grading process will have to be formally recorded at school level and may be communicated to the department.

It said detailed guidance for teachers and principals is being developed on this and will be available soon.

Teachers, meanwhile, are being advised that they must wait until they have received training and guidance from the department before starting any work on the calculated grading process.

The department said training and detailed guidance will be available “shortly”.

Teachers’ unions have been told grading will take place over a number of weeks and is likely to be completed in late May or June.

The Government hopes to be in a position to issue final grades to students in August, similar to the normal results timetable.

Last week, the Government confirmed that it had cancelled plans to hold the summer Leaving Cert exam due to Covid-19 concerns and will offer all students the option of accepting “calculated grades”.

In addition, students will have the option of sitting the Leaving Cert written exams at a later date when public health advice allows, possibly late this year or early next year.

In detailed guidance for calculating grades, it is expected that teachers will be told that each student may be marked out of 1,000 available marks which, in turn, will be converted into percentage marks.

The aim is to separate students in cases where a number of them would be expected to achieve the same per centage mark and automatically create a rank order.

The ASTI union said it understood this approach will be used in the final guidance for teachers.

It is will also provide guidance for students taking extra subjects outside school, such as minority languages or subjects in a grind school.

In these cases, it is likely that the external teacher of the subject will be asked to provide a mark and the student’s performance will be amalgamated within the school grading process.

A new update from the department also indicates that students who are home-schooled or taking subjects outside school entirely will be dealt with on a case-by-case basis.

Where it is relevant, department officials may seek the input of a tutor and any supporting documentation to help arrive at an estimated grade.