Trying to understand a downturn happening at warp speed 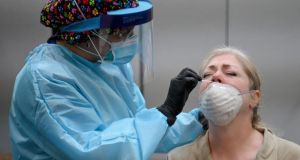 A healthcare worker takes a nasal swab sample. A cost of, say €1.7 billion per annum for PPE and testing is equivalent to the annual budget of the Department of Children or Department of Agriculture and Food. Photograph: Angela Weiss/AFP/Getty

The defining characteristic of the downturn that has hit us is the pace at which it has happened. Welcome to the warp speed recession.

The rapid move from tranquil waters into an economic storm – the like of which we have never seen before – has left us all scrambling to keep up. As reality dawns in the weeks ahead, the politics of this will turn pretty toxic.

Beyond that , a big rebuilding job awaits – and here we will face interesting choices – but for the next few months the big focus will be on firefighting and saving as much of the economy as possible. Rebuilding requires a base to build on – and right now the base is under threat.

You can have great plans for Ireland as a centre of the knowledge economy – but first you have to ensure that the university system can survive in some reasonable shape.

And Green plans for more public transport are vital,but right now the bus and rail companies are crippled with little cash coming in the door. Thousands of SMEs must be saved if tourists are to have restaurants and pubs to return to.

After the last crisis broke in 2008, it took another two years before we really knew the depth of the hole we were in. This time it seems to be happening in two months. In the last couple of weeks expectations of the size of the budget deficit this year have risen from €23 billion to €30 billion.

Just as well we can borrow at interest rates of next to nothing, for the moment anyway, as shown again this week when the National Treasury Management Agency raised another €1.5 billion at low rates.The importance of these low borrowing costs cannot be overstated. But the world has changed and as well as the firefighting costs we will also have some significant ongoing bills – and the need to find a way to pay for them.

Take the PPE bill for the health service. Before the crisis it was a small budget item, costing around €15 million to €20 million a year. Now HSE boss Paul Reid says it will cost €1 billion a year, at least for as long as we are fighting Covid-19.

And considering that around €200 million was spent on the emergency shipments from China during the crisis, it clear that cost has indeed exploded, as well as our demand.

And that’s not all. Testing for Covid -19 does not come cheaply either. We are talking about doing 100,000 tests a week. My understanding is that the tentative costing on this is between €500 million and €750 million a year.Now this is an essential investment for our economy and our society. But the bill still has to be paid.

A cost of, say €1.7 billion per annum for PPE and testing is equivalent to the annual budget of the Department of Children or Department of Agriculture and Food or 8 to 9 per cent of the entire (pre Covid-19) health budget for this year.

It would require a 4 or 5 per cent increase in the top 40 per cent income tax rate to pay for it. As well as the once-off costs from the crisis, we have to figure out what these ongoing costs mean for the budgets of the next few years.

We can carry on borrowing for now, but have to work out what happens after we emerge from the crisis. And remember that our tax base has already been hit by a big shock, too, some of which will also persist,

Another big ongoing cost will, unfortunately, relate to the jobs market where it is clear that as well as a cyclical downturn we are facing structural upheaval in some sectors which will lead to the loss of many jobs.

An astonishing 94 per cent of people who were laid off or are taking leave during the crisis told the CSO in a survey published this week that they expect to return to the same job.

With sectors like tourism, hospitality, aviation and restaurants facing fundamental changes in demand from consumers – for a prolonged period – many people are going be shocked and disappointed when their job does not reappear. The reassuring narrative of shutting down the economy and opening it up again will soon run out of road.

The latest unemployment rate, counting Covid-19 payments, was over 28 per cent. Add in those whose employer is getting a wage subsidy and around 1 in every 2 people in the labour force are having their incomes either fully or partly subsidised by the State.

The economy will get a lift as many people do return to work. And we don’t know how the world will look in a few months – we will keep our fingers crossed for more positive news.

But much of the domestic consumer-facing part of the economy is facing a fundamental change in consumer demand. We will be nervous of flying, sitting in restaurants and cinemas and going to pubs – so many will choose not to and businesses and employment will be hit,

In an analysis this week, KBC Bank estimated that unemployment here could average 14 per cent this year – that’s around 215,000 more than before the crisis hit. On a worst case scenario it could be 20 per cent, 360,000 more, they estimate. KBC expects the unemployment rate to fall to 9 per cent next year, but warns in the worst-case scenario that it could stay stuck around 18 per cent. That is a huge difference in forecasts. But either scenario represents a fundamental change.

The many people left on the sidelines and heading into a longer period of unemployment are going to be feeling pretty sore. As the reality of this sinks in, our politics is going to become difficult and confrontational.