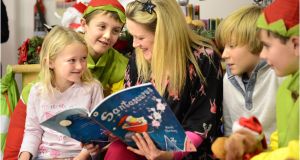 Children’s author Sarah Webb has set up a campaign to send inspirational messages to sixth class pupils who are missing out on their final months of primary school. Photographer: Dara Mac Dónaill/The Irish Times

Sports days, confirmations, school tours and graduations: this year’s sixth class pupils are missing out on key milestones in their young lives.

It has prompted calls for schools to be reopened when it is safe to do so to allow sixth class pupils say goodbye to their classmates and teachers.

“They are being deprived of the opportunity to say goodbye to classmates whom they have sat beside for eight years, before moving on to different secondary schools,” said Green Party education spokeswoman Catherine Martin TD.

“We need to ensure that this landmark event of progressing from primary to secondary school is marked and celebrated by students, their families and their school communities.”

In the meantime, Sarah Webb, an award-winning children’s writer, has set up a movement on Twitter - #Messagesfor6th - with the aim of collecting inspirational messages and sending them to students who are missing out on their final months in primary school.

Webb, who runs online writing workshops for the children of healthcare workers, was acutely aware of the importance that these cancelled events normally play in the lives of young people.

“I think people forget that it is not just the end of school, they have missed sports day, confirmation and graduation but they have also missed being the big kids for the last few months,” says Webb.

“They have missed all these huge rites of passage, which I think are really important for this age group.”

Webb wanted not only to acknowledge the eight years these students had spent in primary school but also celebrate the new beginning that lies ahead for them in secondary school.

“I wanted to make them feel special and to be heard and be seen. I wanted everyone to see sixth class and celebrate how cool they are and what exciting things are ahead of them,” she says.

“I thought: what is the coolest thing I can do for them? And I thought, well, I can ask some of their heroes to give me some personalised messages.”

The movement soon picked up momentum with many writers, sports stars and celebrities eager to show their support.

“A lot of the people involved are ex-primary school teachers, so they get it, they 100 per cent get it,” says Webb.

The videos will be available free of charge via the Children’s Books Ireland website (www.childrensbooksireland.ie) and You Tube channel from the launch day on Saturday 23rd May at 10am.

There will be Irish language messages for gaelscoileanna delivered by Sadhbh Devlin, Patricia Forde and Muíreann Ní Chiobháin, and a message in ISL (Irish Sign Language).

Webb is also keen to cater for all students and have a multitude of interests and role models represented in the messages given.

“I have some sports people and scientists too. I wanted there to be someone for every kid,” she says.

Webb will, of course, be giving a message of her own.

“I found the transition for primary to secondary tricky enough, but I managed, and I had a lovely time once I settled,” she says. “So, I will be very honest in my message. I was very happy in primary school.”