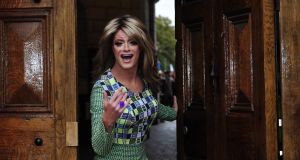 Panti Bliss told young people at a wellness event in Dublin: “If everyone was captain of the football team, everyone would come up with the same solutions.” Photograph: Aidan Crawley

Panti Bliss had a message for thousands of young people who gathered today at a wellbeing summit for teenagers: “Difference is good.”

The drag queen told a packed audience at Zeminar in Dublin’s RDS - billed as “a life-changing day for generation Z” - that diversity is good for everyone.

“If everyone was captain of the football team, everyone would come up with the same solutions,” she said.

Features which make misfits stand out - and which are often a source for bullying - can make them successful later in life, she added.

She was speaking at a seminar which takes place over three days in Dublin this week.

Damien Clarke, a co-founder of Zeminar, said the summit’s focus on health, wellbeing and education was in response to the reality of young people’s lives today.

“All the research says there is more pressure in their lives. Simply put, we’re opening up conversations that teachers might find difficult in their own classrooms,” said Mr Clarke, who is also a counselling psychologist.

“We connect young people to all the different mental health and wellbeing organisations.”

A total of about 15,000 young people are due to attend the event this week to attend workshops, visit interactive exhibits and listen to talks on topics such as mental health and resilence.

Some of the biggest crowds on Tuesday were drawn to stands featuring BIMM music college, where students took part in live music, and Explorium, the sport and science centre, where virtual realitygames were on hand.

Pieta House and Spunout.ie held well-attended workshops on the premises, while the youth wings of political parties - such as Fine Gael, Fianna Fáil and Labour - were present.

Labour Youth was kept busy with a stream of young people queuing for a poster of Michel D Higgins, dressed as a Celtic warrior accompanied by two dogs, with the slogan: #KeepthePoet.

The Central Statistics Office kept a steady stream of young people engaged with interactive statistics which showed popular their names and birth dates were.