From single parent to stockbroker: the power of community education 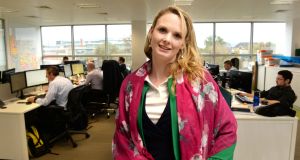 Avril Hannifin, a graduate of An Cosán, at Goodbody Stockbroker’s office in Ballsbridge, where she’s doing a paid apprenticeship. Photograph: Cyril Byrne

Avril Hannifin was a bright spark at school in the Dublin suburb of Clondalkin.

Her parents expected her to go to college. Instead, she fell into poverty and isolation and found herself at the brink of homelessness.

“Both my sisters went to college and I was good at school,” she says. “But when I was 14, my dad had a stroke and mum got sick, and this impacted on my education.

“I got my Leaving Cert results on the same day as I learned I was pregnant, and I didn’t go to college because I felt so ill. Then my focus switched to being a mother, so while my friends were at third level, I was changing nappies.”

She was desperate to get back to education. When her daughter was nine months old, she began taking community education courses.

Today, she is completing a paid apprenticeship with one of Ireland’s largest stockbroking firms, Goodbody.

“I can’t believe the doors that have opened up for me; I couldn’t have imagined this a year ago and I feel positive about my future and ability to give back to society.”

She says community education has played a central role in providing her with a pathway out of poverty towards high-quality employment.

The sector in general has built up a track record of engaging the most hard to reach adult learners through short, part-time courses and programmes which respond to the needs of local communities.

It is often a first step back to education. Some secure employment on foot of courses. Beyond employability, research shows learners leave education as more engaged citizens.

Yet, the sector remains relatively neglected, according to those campaigning for greater investment.

Severe cuts to the community and voluntary sector during the economic downturn impacted on community education provision across the country.

“It’s time for it to go to the ball. Community education tackles educational disadvantage at a community level, providing a warm welcoming environment, holistic supports such as counselling and vital make-or-break supports such as childcare and finances.

“The outcomes are broad and include social inclusion and cohesion; active citizenship and participation; health and wellbeing; and employment and digitalisation.”

In 2016 and 2017, more than 95,000 people completed a community education course, with about half progressing to further education. A small proportion – just over 2 per cent – entered employment or went on a work scheme.

Learners are involved in course design, and the needs of people in the local community are central.

Older people, members of the Travelling community, lone parents and people with disabilities are among the main beneficiaries.

In recent years, the Irish Men’s Sheds Association – an organisation that provides an inclusive environment for men to work together on various projects and helps promote physical and mental health for men – has begun delivering community education programmes, while more established members such as the Longford Women’s Link continue to provide a vital outlet for women in one of the most economically disadvantaged parts of the country.

Funding for the sector is split across various departments. About a third comes from Solas, via the Department of Education. Other funding comes from social protection, children and youth affairs, housing, health and communications, climate action and environment.

“We have failed to crack a sustainable, multi-annual fund for community education,” says O’Reilly.

“It doesn’t fit neatly into one funding stream. It’s positive that Solas have maintained the funding for community education, but sometimes that funding only covers tutor hours, not the cost of the building and everything else needed to run a centre.”

There are still obstacles such as proposed fees of €5,000 for accrediting community education courses through the State’s quality watchdog.

Outcomes in community education are not always measurable in terms of labour market focus, which can leave it more vulnerable to cuts.

“New funding for the adult education field continues to focus on higher education, and education that has clear and quantitatively measurable employment outcomes,” says O’Reilly.

“This puts most community education providers and courses at a funding disadvantage as the purpose of much community education is not first and foremost to increase employment, but rather to broaden access to learning and thereby include productively include people in their communities and giving them the opportunity to learn. Employment may be a benefit but it is not the primary goal, nor the singular focus.”

For Hannifin, however, community education has offered hope and a way out of poverty.

“I wanted to provide a better life for my daughter but my confidence was at rock bottom. I did as many courses as I could, and I found the group work and small classes and supports really lifted me.”

Eventually, Hannifin was referred to An Cosán, a community education organisation founded by Katherine Zappone – now Minister for Children – and her late wife, Ann Louise Gilligan.

An Cosán was set up to provide community-based education for people who don’t follow the traditional pathways to education and employment (see panel).

“I studied for a level eight degree in community development and leadership,” says Hannifin.

“The difference with An Cosán is that you can pay in instalments, and parents can avail of creche and afterschool facilities. It is intensive, there is lots of self-direction and you have to be disciplined, but the course gave me a great education, a group of friends and a lot of opportunities.

“I’m now doing a paid apprenticeship at Goodbody Stockbrokers and I can’t believe the doors that have opened up for me; I couldn’t have imagined this a year ago and I feel positive about my future and ability to give back to society.”

€2 a day: the cost of transforming a life through education

From its base in Jobstown, a disadvantaged area in west Tallaght, An Cosán has grown into a national organisation providing online learning for under-served communities throughout the country.

Over the last 30 years, the organisation has worked with more than 16,000 learners in Jobstown. Since winning an award through the Social Entrepreneurs Ireland fund in 2014, it has helped over 1,000 learners through its virtual community college model which has been developed with IT Carlow.

Liz Waters, chief executive of An Cosán, says community education providers work with people who have been failed by the formal education system, particularly those who struggle with poverty or disadvantage.

But, with courses typically costing just over €2,000 per year, the cost can be prohibitive for those learners who are looking for a route out of poverty.

“Most of those we work with are on one form or another of social welfare,” says Waters.

“We have a bursary fund which is supported by the Lauritzen Foundation and provides scholarships for students, and we also get support from the ESB, but we don’t have the money to support all the learners we need.”

An Cosán receives over half of its €3.3 million support from the State. “We acknowledge all the great support for our organisation in west Tallaght, but we are now a national organisation reaching learners nationwide, and we could do so much more to help communities in poverty if the funding was available.

“Community education is too often the poor child at the table, fighting for the crumbs,” she says.

“Bringing a young woman, a lone parent, to degree level means that she will earn 62 per cent more than without, and it can help her family exit poverty – and thus save the State money – forever.”