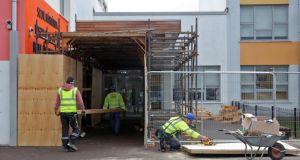 Builders pictured carrying out remedial work on November 5th at Tyrrelstown Educate Together School. The school had closed to pupils due to building defects Photograph: Colin Keegan/Collins

Parents of some pupils at a school which is at the centre of structural concerns are refusing to send their children back to class over safety fears.

Remedial works have been carried out over the past fornight at St Luke’s and Tyrrelstown Educate Together national schools to allow them to partially reopen this week.

Parents and staff members were told at meeting on Wednesday morning with Department of Education officials and structural engineers that the building was structurally sound.

However, some parents say temporary repair works pose a threat to their children, while others are still not convinced that the building are structurally safe.

A number of parents are planning to hold protest outside St Luke’s on Thursday morning.

One parent, who declined to be named, said she was shocked at the condition of the school.

“It still looks like a building site. There’s scaffolding holding up walls and roofs . . . it’s not a safe place to bring children in,” she said.

Cllr Matt Waine, who was at the meeting, said many parents were frustrated and angry over what has happened to their school.

“The measures put in place look fairly rudimentary and could pose health and safety risks, like sharp edges, scaffolding, exposed timber,” he said.

“The schoolyard looks like Mountjoy Prison: there are metal bars and scaffolding. A number of parents are unhappy with the explanations they’ve been given and won’t send their children there.”

Tyrrelstown Educate Together is due to reopen on Thursday after its board of management received the results of a positive independent health and safety assessment report on the internal alterations to the school.

In a statement, St Luke’s said its patron and the board of management were also satisfied that the building was now structurally sound and it hoped to reopen on Friday.

After taking some additional concerns of parents into account, extra works such as meshing around scaffolding and padding on pillars are to be added to the building.

In the Dáil earlier on Wednesday, it emerged that the Department of Education has asked the construction company it is legally pursuing over building work it completed at four schools, if it will repair those premises.

Minister for Education Joe McHugh confirmed that Western Building Systems (WBS) the construction firm at the centre of controversy over concerns about structural issues at dozens of schools it built, has been asked if it will do repair work at four of them.

The Department is taking legal challenges against WBS over those four schools in relation to fire safety defects.

Mr McHugh was responding to questions in the Dáil after he made a statement about the department’s plans to deal with the school building controversy which emerged last month.

He told the Dáil: “We’ve asked Western Building systems to look at four particular schools to see will they come forward and do the required work. Those four cases are undergoing litigation.”

Independents4Change TD Mick Wallace said that in 2015 then minister for education Jan O’Sullivan was looking at safety issues in relation to WBS and it still got more schools to build.

He asked why a government gave more work to a company “that had proven itself to be doing bad work”.

He added: “I can’t understand why nobody gives a b*llocks.”

Mr Wallace said that the 18 per cent increase in building costs since stricter regulations were introduced was to do with paper work. “None of it is supervision.”

Mr McHugh said he could not give a timeline for the independent review of the department’s design and build programme but he wanted it done “in as speedy a manner as possible” and not six or nine months.

The next phase of work is more detailed structural investigations of the 42 schools and then implementation of permanent remedial work involving tenders and contracts.

He said there were unacceptable standards in schools and they wanted to establish culpability as he stressed that the onus was on builders and their design teams.

Labour finance spokeswoman Joan Burton estimated the repairs could cost between €50 million and €120 million but Mr McHugh said it would not cost that amount because building all the schools had cost €151 million.

Social Democrats TD Róisín Shortall had claimed there was a conflict of interest and “no transparency” in relation to a project management company KSN.

She said the company had project managed 12 of the schools built by WBS and was then brought in to do the structural assessments.

Mr McHugh said the company had tendered and got the job for a random audit to assess 55 schools, including 30 WBS schools and 25 others but it was an engineering firm that did the actual structural assessment. The Minister added that KSN “did not certify any issues of compliance on the projects”.

He rejected claims from Fianna Fail education spokesman Thomas Byrne of a cover up over fire safety audits and said there were assessments in 2014 and late last year. This was separate from structural defects found in the past fortnight.

But Sinn Féin TD Pat Buckley said that “somebody has to be hiding something somehow. Someone covering someone’s back.”

Mr McHugh had told the Dáil that 19 schools of 42 structurally assessed had been given the all clear. A further 19 had external precautionary measures taken including fencing around schools and protective decking at all entrances and exits.

Two schools in Tyrrelstown and one in Lucan in Co Dublin will re-open on Thursday at ground floor level only, following internal engineering work and external precautionary measures.