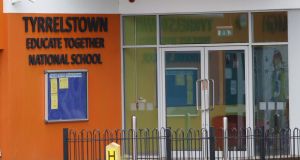 Tyrrelstown Educate Together School is due to partially reopen today after its board of management received positive results from an independent health and safety assessment on the internal alterations to the school. Photograph: Nick Bradshaw/The Irish Times

Hundreds of pupils in west Dublin are due to return to school two weeks after their building was closed due to structural concerns.

Tyrrelstown Educate Together is due to partially reopen today after its board of management received positive results from an independent health and safety assessment on the internal alterations to the school.

St Luke’s national school - which shares a campus with the school - has also said its building is structurally sound and plans to reopen on Friday.

After taking some additional concerns of parents into account, extra works such as meshing around scaffolding and padding on pillars are being added to the building.

However, some parents of pupils are refusing to send their children back to class for fear of their safety.

They argue that temporary repair works pose a threat to their children, while others are still not convinced that the buildings are structurally safe.

A number of parents are planning to hold a protest outside St Luke’s on Thursday morning.

One parent, who declined to be named, said she was shocked at the condition of the school.

“It still looks like a building site. There’s scaffolding holding up walls and roofs... it’s not a safe place to bring children in,” she said.

Cllr Matt Waine, who was at the meeting, said many parents were frustrated and angry over what has happened to their school.

“The measures put in place look fairly rudimentary and could pose health and safety risks, like sharp edges, scaffolding, exposed timber,” he said.

“The schoolyard looks like Mountjoy Prison: there are metal bars and scaffolding. A number of parents are unhappy with the explanations they’ve been given and won’t send their children there.”