‘There’s nothing wrong with women . . . We are more than capable’ 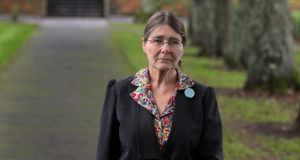 Dr Micheline Sheehy Skeffington won a landmark Equality Tribunal case in 2014 after it found she lost out on a promotion on the basis of her gender Photograph: Joe O’Shaughnessy

Dr Micheline Sheehy Skeffington has first-hand knowledge of what it feels like to be passed over for promotion on the basis of your gender.

She was one of 46 people from across the campus of NUI Galway who applied for promotion to senior lectureship in 2008.

Of those candidates, 23 men and seven women were shortlisted for interview, of whom Dr Sheehy Skeffington was one.

By the end of the selection process, in 2009, 16 men and one woman had been promoted.

Dr Sheehy Skeffington was unsuccessful – for the fourth time in a row.

The Equality Tribunal ruled in November 2014 she had been discriminated against on the basis of gender and should be promoted to the post of senior lecturer.

NUI Galway was ordered to promote her along with a tax-free sum of €70,000. The university was also ordered to review its policies and procedures in relation to promotions.

“My family history of trying to address injustice was part of the reason I took this case. I’d never have taken it if it was just about me,” says Dr Sheehy Skeffington, grand-daughter of suffragette Hanna Sheehy Skeffington.

“I believed I was representing discrimination against women in general. I have it in the genes. If I see an injustice I have to do something about it.”

She believes her case put down a marker for the importance of gender equality in promotion at third-level institutions.

NUI Galway has since promoted and compensated five other women lecturers who argued that they discriminated against on gender grounds.

It has also introduced sweeping changes such as gender quotas for promotion schemes, along with inclusivity and unconscious bias training programmes for managers and staff.

Dr Sheehy Skeffington has given a cautious welcome to the new recommendation of the gender equality in higher education taskforce.

She says gender-specific posts are a good idea, but only as a temporary measure to achieve sustainable change.

“There is an underlying bias against women. They are perfectly well-qualified for these types of posts but they aren’t being promoted,” she says,

“We’re sick of being scrutinised to find out with what’s wrong with us. The issue is with the system and the way men are promoted.

“The current pace of changes is too slow. Some say, ’it took us 100 years to get this far, we must be patient’.

“But, I’m sorry, it’s not. Gender-specific posts or quotas are a good idea, on a temporary basis, to change the culture and show that women can thrive in leadership roles. We are more than capable.”