Ask Brian: Points for some high-demand courses could end up droping this year 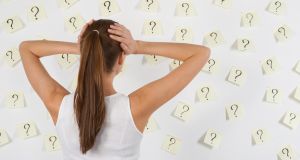 There are a few reasons to be hopeful that points for some high-demand courses may fall this year. Photograph: iStock

My daughter was hoping to study medicine in September but has just received a disappointing Hpat result. She is now unsure how to proceed with her CAO application as she has to complete it in time for the July 1st deadline. What would you advise?

You did not indicate what score your daughter received in her Hpat test, so I’m not certain she is totally out of the reckoning to secure an offer this year. If anything, there are a few reasons to be a bit more hopeful this year compared to others.

Firstly, even though the number of undergraduate CAO places on offer for medicine is capped - at around 483 - this number is enhanced by the numbers of international students who annually register as medical students in our five medical faculties. With many of these students unlikely to arrive this year, it will be a matter for the Higher Education Authority (HEA) to decide whether to increase the numbers of medical places made available to domestic students, on a one-off basis, to bring class numbers up to their normal levels.

A second reason for hope is that a significant number of this year’s CAO applicants may have reservations about commencing third level in 2020 due to the restricted nature of college life. If this becomes a reality, CAO entry points for courses could drop.

Many people are under the misapprehension that CAO points are set or predetermined by faculties or colleges. In reality, it is determined by the supply and demand of places.

From your daughter’s perspective, one negative may be that the ability to fill seats in lecture theatres is the last thing that colleges will be able to plan for in September. In medicine, as in many other paramedical, nursing, scientific, computing, architectural and engineering, etc. courses, the centrality of practicals and laboratory work will mitigate against offering increased numbers of places.

I can assure her that if her heart is truly set on becoming a doctor, a modest Hpat result should not deter her ambitions.

Numerous medical deans have confirmed to me that being a successful doctor has no relationship to Hpat performance. Its just a test which is still used in Ireland, even though it has been abandoned in many other parts of the world.

Your daughter can always decide to pursue another degree of her choice, preferably scientific based; provided she secures a 2:1, she can apply to study medicine over four years through the graduate route.

She might also consider a medical degree at a European university. Those in northern Italy are attracting a growing number of Irish applicants. All lectures are through English and fees are quite modest. See eunicas.ie for more details.

Whatever she does, she should cover all eventualities in her list of ten CAO course choices by July 1st next.