‘Small number’ of schools yet to complete calculated-grades upload 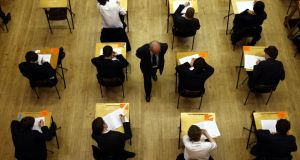 Once the marks have been provided by all schools they will be subject to a process of national standardisation. Photograph: David Jones/PA Wire

A “small number” of schools have yet to complete the process of uploading data relating to calculated grades for Leaving Certificate 2020.

The Department of Education’s calculated-grades collection system - which allows schools to upload data on the estimated marks and class rankings for Leaving Cert students - was due to shut at close of business on Monday.

A department statement said almost all schools have fully completed the process.

The dedicated portal was due to close last Friday but the deadline was extended to facilitate schools who had yet to fully complete the process.

The system to calculate grades was devised as a means of recording the results of Leaving Cert students who had originally been due to sit exams this month.

Plans to sit the exams later in the summer were shelved following an assessment of public health advice due to the Covid-19 pandemic. The decision followed an extensive period of consultation with an advisory group including students, teachers, school management bodies, the State Examinations Commission and the National Council for Curriculum and Assessment.

Once the marks have been provided by the school, they will be subject to a process of national standardisation. This will ensure that students will receive official certification enabling them to get job or progress to third-level education in the autumn.

Clive Byrne, director of the National Association of Principals and Deputy Principals (NAPD) said it took “an enormous national effort” to ensure the system worked to the degree that it did.

“In a funny sort of a way, it was the best of Ireland coming together in the midst of a really, really serious educational emergency and they came through it,” he said.

“The Department of Education and the Minister for Education said this was a crisis and we were responding in a particular way. It wouldn’t act as a precedent,” he added.

“I think people were more fearful of the process than turned out to be the case. I think everybody played their part.”

He noted that concerns about conflict of interest were allayed as mechanisms were introduced to ensure that teachers who may have a family member attending their school would not be involved in the inputting process.

“That operated up to the principal and deputy principal level in schools. If a deputy principal or a principal’s son or daughter was involved in the process then someone else would have been assigned the role of approver,” said Mr Byrne.

For students, the next stage of the process will involve choosing whether to opt for a calculated grade. The percentages submitted by schools will be subject to verification before they can specify their choice.

More than 60,000 students provided contact details through the student portal some weeks ago and they will be contacted directly when it is time to indicate if they wish to opt-in to receive their calculated grades.

It is expected that the majority of students will select this option.