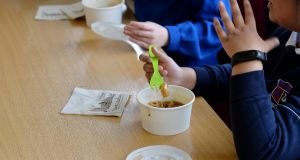 The Government is to extend the meals programme for disadvantaged schools until the end of the summer. Photograph: Alan Betson

The Government is to extend the school meals programme for disadvantaged schools until the end of the summer.

The Department of Social Protection indicated in an answer to a parliamentary question recently that the programme would cease at the end of the school year.

However. following a campaign to reverse the decision, outgoingMinister for Social Protection Regina Doherty confirmed that it will be extended to all schools currently involved until the end of August.

“ I want the funding to be available over the summer period to support children who do not have access to nutritious food to enable them to continue to receive meals during the summer school holidays,” Ms Doherty said.

The programme provides funding towards provision of food services for disadvantaged school children, with more than 1,500 schools and organisations involved benefitting up to 250,000 children.

Under the revised scheme, families of students receive weekly bags of food instead of daily lunches.

Concerns over the impact of “holiday hunger” on children had been voiced by many, including from Labour Party TD Aodhán Ó Ríordáin, who set up an online petition calling for its extension.

“I have been calling for the Government to make this decision since I received an answer to a parliamentary question which stated that school meals would not continue into the summer,” he said.

“I did make an appeal to Joe McHugh this week and he said that he would seek to get movement on this issue from the Department of Social Protection.

“I greatly appreciate the efforts. Vulnerable children will now be assured of nutritious and regular meals for the rest of the summer.”

Some not-for-profit initiatives, such as Good Grub, had pledged to continue providing food packs until the end of August regardless of the Government decision with the help of fundraising.

The organisation was set up by Denis O’Reilly, whose Wild Wicklow Tours business closed during the Covid-19 crisis.

Good Grub sourced an initial donation of fruit and vegetables and, with the help of family, packaged it into 1,000 packs and distributed it to Deis schools around Dublin. It has since sourced funding through online donations.

“On Good Friday set we up a Go Fund Me page and it has gone crazy well form there,” said Mr O’Reilly. “We are close to half a million euro.”

Change X, an online platform that promotes social and community- based projects, donated €50,000 to assist with the scaling up of the initiative.

“We were then able to get to 13 counties around Ireland, but we are still limited to 5,000 packs a week in Dublin and 12 other counties,” he said.

Good Grub partnered up with Glanmore Foods, an established lunch provider, who helped them distribute the fruit and vegetables.

“Rather than reinventing the wheel, we asked if we could use other services,” said Mr O’Reilly, “Glanmore have all the connections with other schools so we have grown from delivering 1,000 packs a week to 5,000 packs - that’s 20 tonnes of fruit and veg.”

St Monica’s Infant Girls’ school in Edenmore, Dublin, is one of the schools to benefit from the support of the initiative.

Sinéad Mullen, principal at St Monica’s, said families within the school community have been delighted to hear they will continue to receive food during the summer.

“We contacted all the families at the beginning of June to offer it to them and ask them to sign up if they wanted and there has been an overwhelming response, people are delighted to be continuing with the school meals programme during the summer months,” said Ms Mullen.

“ None of us know what the economic impact on any household has been. It will be a huge relief to families who now know that there will be a certain amount of support available,” she said.

Ms Mullen said the programme will have an additional benefit of maintaining a connection between schools and families in the community.

“One positive, which is entirely separate to the food, is that it will help families maintain engagement with the school. This is a huge thing for the families that have been removed from face to face school life since March,” she added.

“This initiative is something that can be kept going through the summer months and helps us to keep linking in with the families.”