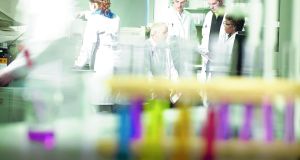 Waterford Institute of Technology and IT Carlow are preparing a joint bid to merge and become a technological university.

Plans to create a technological university for the southeast have hit a new setback.

While Waterford Institute of Technology and IT Carlow are preparing a joint bid to merge and become a technological university, staff at Carlow voted down the latest step in this process.

Teachers’ Union of Ireland (TUI) members at IT Carlow rejected an agreement over working conditions by 60 per cent, while it was accepted by 93 per cent of members at Waterford Institute of Technology.

It is understood that differing work practices at each institution were a key issue in the ballot, with concerns that staff at IT Carlow would see much greater changes in their work practices.

The TUI had sought assurances through the establishment of a memorandum of understanding covering structures for handling industrial relations in the proposed technological university.

IT Carlow management described the result as disappointing. In a statement, a spokesperson said it did not consider delays due to industrial relations unusual for such a project.

“These arise from differing work practices, operating models and expectations across merging institutes that have evolved as independent entities over many decades,” it said.

“Many of the issues identified for harmonisation in the new TUSEI (Technological University for the South East Ireland) are complex and multi-faceted, impacting not only on members of the TUI, but also on learners, all staff and external stakeholders.”

He said he hoped to continue discussions for a merger in the WRC.

While there have been calls locally for Waterford to now go it alone in becoming a university, Mr Donnelly said that “isn’t an option”. Legislation surrounding the TU process requires institutes to become partners and combine and harmonise their offerings.

“Why go back and start pushing the government to change the legislation, when the legislation that’s there will deliver what we need,” said Mr Donnelly.

However, the secretary of the TUI’s branch at WIT, Dr Kathleen Moore Walsh said she was “livid” after the Carlow result was announced.

She said there had been six months of negotiations culminating in “two long days in the Workplace Relations Commission” where a proposed memorandum was reached on June 11th between WIT and IT Carlow and the TUI branches in both institutes.

“I have long wondered about the commitment of IT Carlow for a technological university for the southeast,” Dr Moore Walsh said.

Union representatives at IT Carlow did not respond to requests for comment and IT Carlow management said the issue would be discussed at a meeting of its governing body at the end of the month.

The TUI national office said the union will now engage in a consultative process with members in the branches to progress this matter.

“The union remains open to further engagement with the two institutes and the assistance of the Workplace Relations Commission, ” it said.

Sinn Féin TD for Waterford David Cullinane said politicians and stakeholders need to avoid being “knee jerk in our response” to the Carlow ballot. “We must listen to their concerns and move forward together,” he said.