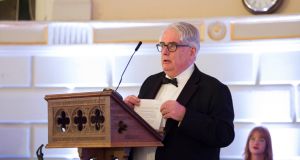 Laws aimed at cutting the numbers jailed for unpaid fines are “not working”, Chief Justice Mr Frank Clarke has warned.

Speaking at The Irish Times Debate final at Trinity College Dublin, he said the fines system has “broken down” because laws enacted in 2014 have no mechanism to ensure people turn up in court to explore options available to them.

“Large numbers of people are fined in their absences for relatively minor offences. They then get a notice telling them to come along to debate what should happen. They don’t turn up,” he said.

“Unless the guards are going to spend all their time going out, executing warrants to arrest people for very minor offences like not paying their TV licence, and not detecting serious crime, then that system won’t work. We said it wouldn’t work . And it isn’t working.”

The Fines (Payment and Recovery) Act 2014 was intended to expand the options available for recovery of fines and to reduce the numbers imprisoned over failure to pay a fine imposed following court proceedings.

However, the Chief Justice said while many do pay their fines, and others may not be able to do so, there was a “group in the middle who will only pay them if there is some incentive to do so. And our system gives them no incentive to do so”.

He also said the “revolving door” aspect of prison meant many offenders were choosing jail sentences over alternatives such as community service.

District Court judges find that their “regular customers” who know the system realise that if they receive a short jail sentence, the “worst that will happen is they will stay in for one night”.

“Why is that ? Because too many people are in prison. Not unreasonably, prison governors keep the people who have been sentenced to long sentences for serious crime and therefore those who get short sentences walk out the door.”

The Chief Justice said these problems illustrated the need for joined-up thinking to solve the problem of too many people in prison for short sentences.

“Just coming up with what seem to be clever ideas, without thinking through how they are going to work in practice or providing the resources to make it work in practice, is not a solution,” he said.

He also said it was time for a real debate in society about whether we should have crimes of “gross carelessness” for areas such as financial mismanagement.

The Chief Justice said much of what happened that led to the financial crash was not considered a crime at the time.

“One might argue about whether it was careless, very careless, or grossly careless,” he said.

“There is a certain logic in saying that if you are in charge of something which intrinsically is likely to cause damage – either to an individual or lots of people – there may be a case for suggesting that, in some limited cases, there is scope for the creation of a limited class of crimes of carelessness in those areas.”

He added: “I think we need a national debate about whether we want to turn that kind of thing into a crime.”

Speakers were competing for the Demosthenes Trophy for best team, and the Christina Murphy Memorial Trophy for best individual, as well as a place on a month-long tour of the US for the three winning speakers.

The motion up for debate was “This house believes that the Irish criminal justice system is too weak on crime”, resulted in combative and entertaining contributions from teams representing UCD, Trinity, NUI Galway and the Law Society of Ireland.