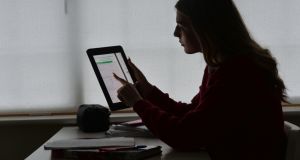 A highly critical report into the mandatory use of iPads in a school has found that students were frequently distracted by the devices and used them for gaming, shopping and social media instead of class-based work.

The findings are contained in a report by a team of experts commissioned by Ratoath College, a 1,000-pupil secondary school in Co Meath which recently decided to drop its iPad-only policy and reinstate the use of schoolbooks.

The report, seen by The Irish Times, is likely to be influential in shaping how other secondary schools incorporate technology in the classroom.

“Distraction” is a key theme which emerged from the review, with teachers and parents reporting that monitoring iPad use in class was an ongoing challenge.

“From the teachers’ perspective, many reported that when they are at the top of the classroom the student ability to switch from class-based work on iPads to recreational activities such as gaming, shopping and engaging with social media was a matter of concern,” the report states.

It quotes one parent, who stated about her son: “He is totally distracted . . . no backup of books for him to study from. Can’t confiscate iPad . . . Wifi needed for my job full-time from home, therefore cannot switch it off.”

It also found that an issue raised by teachers was parents messaging their children during classtime.

In addition, students who were surveyed also cited distraction as an issue, with more than one-third of respondents stating it was a problem.

The report’s authors note that the short time students spent on the online survey was “indicative of the distraction that the iPad affords”.

While the survey typically took 15 minutes to complete, many students spent between three and five minutes on it.

A small number of parents noted that they felt their children were enjoying use of the iPad and that it had enhanced their learning.

The report also highlights poor access to digital resources and e-books on the devices.

In many cases, it found that teachers were forced to hand out “copious amounts of photocopies and notes”.

Also, it was often reported that the students’ only records of classwork were poor quality photographs they took of writing on the classroom whiteboard.

The report endorses its findings by quoting international research, which has found that a “rapid , indiscriminate move away from paper is not without negative consequences”.

Some parents reported that they ended up organising private grinds for their children in subjects where there was little appropriate digital content for children.

The report quotes international research which backs this finding up, noting that while “printed texts afford numerous stable anchors for memorising, digital texts are much reduced in this respect”.

Another concern highlighted in the report is the high cost of the devices, increased levels of screentime and conflict at home over digital curfews.

On a more positive note, it found there were no flagged instances of cyberbullying associated with the devices or of access to “inappropriate content”.

The “independent digital review group” issued its report to Ratoath College’s board of management last month.

Among its recommendations are that first-year students should no longer be required to buy an iPad.

In future, teaching and learning at the school should be based on a “blended approach” that involves textbooks and technology.

The school had been at the centre of controversy following a vocal campaign by some parents who were concerned over the amount of time their children were spending on screens.