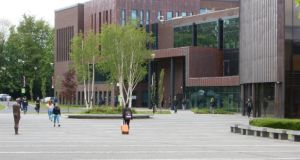 The University of Limerick said the twin room option deals with an accomodation supply deficit while also providing an affordable choice.

The president of the Union of Students in Ireland (USI) has criticised the University of Limerick (UL) for proposals for on-campus accommodation that includes putting a second bed into rooms that were previously designed for single occupancy.

Lorna Fitzpatrick said it is impossible to see how students would live or study in the conditions proposed by UL management.

In a statement the university said that a shared (twin room) option in UL’s on-campus accommodation was being introduced in an attempt “to meet unprecedented demand in the shortest possible timeframe amid a national housing crisis.”

Ms Fitzpatrick told RTÉ radio’s Today with Seán O’Rourke, that a second bed was being added into what was originally a single occupancy room.

“The phrase ‘you couldn’t swing a cat in the room’ doesn’t even cover it. There is a tiny gap in between two single beds and one small work station at the foot of the bed, so it’s impossible to see how you could live comfortably or study in these conditions.

“It is important to note that an awful lot of these rooms at universities around the country are assigned on a lottery-based system, so you don’t necessarily know the person that you will be sharing a room with, especially in these conditions.”

Students will be “forced into taking this accommodation, in cramped conditions, because they can’t afford anything else,” she said.

These recent proposals will put students “under extreme pressure” as they are already experiencing “an average 3 per cent to 4 per cent increase in rental cost”.

The statement from UL said that wider development plans are currently under consideration for new-build on-campus accommodation, however this will take some time to bring to fruition.

“The twin room option deals with the supply deficit while also providing an affordable option to many students.

“Last year, there was almost 7,200 applications from students for the 2,850 available beds in the six on-campus villages. The twin room option will add a further 630 beds.

“In the past five years, UL has spent €20 million in refurbishment and upgrade costs across all of the on-campus accommodation villages. More than €2.4m will be spent this year and next in further enhancements to existing accommodation services.

“Twin room costs will range from €2,800 to €4,250 per person, which includes utilities and UL Sport membership.

“A maximum of two bedrooms within an existing six-bedroom apartment in four of the villages will be retrofit for the shared accommodation (twin room) option. These will all be en-suite.

“The planned twin room development is compliant with Part B of the Functional Requirements of Building Regulations. UL’s accommodation allocation policy will prioritise the most vulnerable students – incoming first year students, international students and those in final year.

“Some students have requested the twin room option, either because they want to room with a relative or friend, or because it is the most affordable option. A pilot programme has also run successfully.

“In a student accommodation survey completed in 2019, 76 per cent of students who responded (1,323 in total) said that they were willing to share a room on campus at a cost of between €3,500 and €3,750. Single semester accommodation for second and third year students will be available as a twin room option,” the statement concluded.