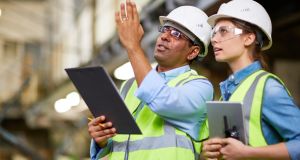 The numbers taking on apprenticeships plummeted during the recession, falling from about 29,000 to just above 5,700 in 2013. Photograph: iStock

Just 2 per cent of school-leavers are pursuing apprenticeships as a route into work compared with 60 per cent in Germany, an Oireachtas committee has heard.

While there are ambitious Government plans to rapidly expand the number of school-leavers taking up apprenticeships, education providers have warned that will require significant investment and reform.

The numbers taking on apprenticeships plummeted during the recession, falling from about 29,000 to just above 5,700 in 2013.

Under the Government’s national skills strategy, there are plans to make apprenticeships and traineeships an “attractive and respected” option for at least one in five school-leavers .

The plan includes broadening the number of apprenticeships beyond traditional areas – such as construction and engineering – and into ones such as medical devices and financial services.

Des Murphy of Education and Training Boards Ireland, the representative body for the country’s main providers of further education and training, said apprenticeships could play a crucial role in meeting the future skills needs of the country.

However, he said there was an “urgent need to improve career guidance in relation to apprenticeship and traineeships” and to attract more employers to the sector.

“A significant proportion of future jobs will be neither particularly high-tech, nor towards the top end of the occupational ladder,” he said.

“But all jobs, at all levels, will require increasingly higher levels of knowledge, skill and competencies,” he said.

“ The big skills challenge for Ireland will be in the provision of low and medium skills and qualifications – in further education and training, where an effective work-based learning model can play a vital role.”

Michael Hourihan, the head of Cork Institute of Technology’s centre of craft studies, said many Leaving Cert students, their parents and some career guidance teachers do not know how the Irish apprenticeship system works.

“The view is that apprenticeship leads only to a trade qualification and that following the Leaving Certificate the only real option is to look at the CAO system. In my opinion nothing is further from the truth,” he said.

“It should be noted that standard CAO entry to higher education is not for everyone as is highlighted by high drop-out rates in certain disciplines.”

He said the “earn-and-learn” apprenticeship model would be a successful option for many of those young people who do not want to further their studies through the CAO process.

“Within engineering and manufacturing industries tradespersons have many progression paths available to them including supervisory roles, training and junior engineering positions amongst others,” he said.

Solas, the education and training body, said good progress was being made in expanding the sector with five new apprenticeships launched in recent months, and a further 19 in development.

“The Irish apprenticeship system has demonstrated its worth for many decades, including, for example, through our continuing successful participation in the WorldSkills competitions,” said Solas chief executive Paul O’Toole.

“Having come through a difficult period during the recent recession, this system is on a welcome upward trajectory, both in the existing craft apprenticeships and the new ones which have already been introduced or are in gestation.”

Mr O’Toole said he was confident that ambitious targets for apprenticeship were achievable through employer demand and commitment, with the support and investment of government and its State bodies.